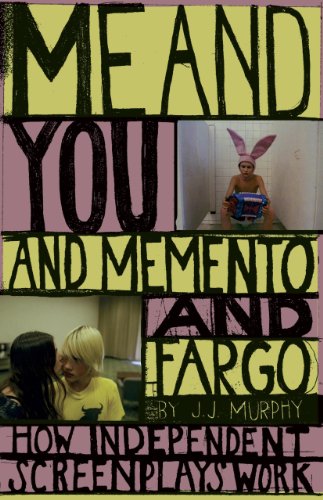 In Stock
$21.49
+10% GST
From "Stranger than Paradise" (1984) and "Slacker" (1991) to Miranda July's "Me and You and Everyone We Know" (2005), indie cinema has become part of mainstream American culture. But what makes these films independent? This title argues that the American independent feature film since the 1980s has developed a distinct approach to filmmaking.
Good
Only 1 left

Me and You and "Memento" and "Fargo" Summary

Me and You and "Memento" and "Fargo": How Independent Screenplays Work by J. J. Murphy

Within the last twenty-five years, an enormous burst of creative production has emerged from American "independent" filmmakers. From "Stranger than Paradise" (1984) and "Slacker" (1991) to Gus Van Sant's "Elephant" (2003) and Miranda July's "Me and You and Everyone We Know" (2005), indie cinema has become part of mainstream American culture. But what makes these films independent? Is it simply a matter of budget and production values? Or are there aesthetic qualities which set them apart from ordinary Hollywood entertainment? "Me and You and Memento and Fargo" argues that the American independent feature film from the 1980s to the present has developed a distinct approach to filmmaking, centering on new and different conceptions of cinematic storytelling. The film script is the heart of the creative originality to be found in the independent movement. Even directors noted for idiosyncratic visual style or the handling of performers typically originate their material and write their own scripts. By studying the principles underlying the independent screenplay, we gain a direct sense of the originality of this new trend in American cinema. There are many screenwriting manuals and guidebooks on the market, but they pose many problems for the aspiring independent filmmaker. First, they all rely on formulas believed to generate salable Hollywood films. For instance, most writers, including Syd Field ("Screenplay"), Richard Walter ("Screenwriting"), and Linda Seger ("Making a Good Script Great"), present a "three-act paradigm" as gospel and proceed to lay down very stringent rules for characterization, plotting, the timing of climaxes and so on. Some writers, notably Field and Seger, even go so far as to demand that the screenwriter present a dramatic turning point within specific pages. Even advice books that appear to be more open about such rules (e.g. Robert McKee's "Story") turn out to be just as inflexible in their advice. But the screenwriting manuals tend to ignore the fact that Hollywood companies do not want only the formula; they also want novelty (which is hard to teach as a set of rules). The independent filmmaker is usually aware of the rules but treats them as flexible guidelines, to be used as necessary but also to be rejected or reworked if it will be of creative benefit. The screenplay manuals have a second fault. On the rare occasions when they deal with independent films, they tend not to appreciate the genuine innovations that the films introduce. This is partly due to the fact that the manuals' authors are unaware of the historical tradition of independent cinema. Thus, McKee treats "Stranger than Paradise" as an "anti-plot" film. This category, however, cannot adequately analyse what the film does positively; it does not lack a plot, but rather has a different kind of plot. Ironically, it has a three-act structure, but the structure becomes geographical rather than plotted as a dramatic arc. Moreover, "Stranger than Paradise" derives its approach to storytelling from 1970s minimalist cinema, punk subculture, and the Beat tradition of "Shadows" and "Pull My Daisy". The fullest understanding of the independent film's innovations comes from an awareness of the historical tradition it continues. "Me and You and Memento and Fargo" offers a positive account of the various options open to the independent screenwriter. The book shows the broad range of creative principles that have been used in the narrative construction of independent films. One consequence of this is to show the uniqueness of this phenomenon by positioning it as a hybrid form that exists somewhere between the classical Hollywood tradition and "art cinema."

Me and You and "Memento" and "Fargo" Reviews

"With J.J. Murphy's insightful look at American independent screenwriting [in] "Me and You and 'Memento' and 'Fargo' How Independent Screenplays Work"...Murphy focuses on independent cinema in clear, engaging prose, tracking how a series of seminal independent features were developed and written and his case studies include scripts and films by Jim Jarmusch, Hal Hartley, Allison Anders, Miranda July, David Lynch and Gus Van Sant.

J. J. Murphy is Professor of Film Production and Film Studies at the University of Wisconsin-Madison, USA. He has been an independent filmmaker for nearly thirty-five years; his films have played at major international film festivals (New York, Edinburgh, Berlin, Florence, South Korea, Wellington, and Auckland) and have been screened at the Museum of Modern Art, the Whitney Museum of American Art, the Austrian Film Museum (Vienna), the Barbican Film Centre (London) and the Centre Georges Pompidou (Paris). He has taught film production and screenwriting for nearly thirty years.

GOR009686636
Me and You and "Memento" and "Fargo": How Independent Screenplays Work by J. J. Murphy
J. J. Murphy
Used - Good
Hardback
Bloomsbury Publishing PLC
2007-05-15
256
0826428045
9780826428042
N/A
Book picture is for illustrative purposes only, actual binding, cover or edition may vary.
This is a used book - there is no escaping the fact it has been read by someone else and it will show signs of wear and previous use. Overall we expect it to be in very good condition, but if you are not entirely satisfied please get in touch with us.