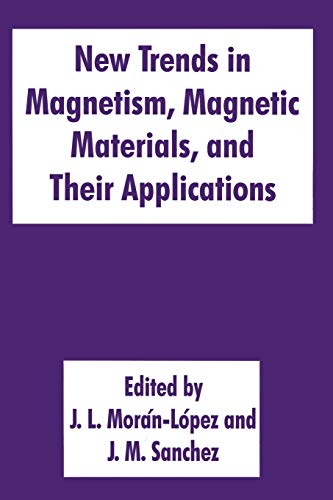 New Trends in Magnetism, Magnetic Materials, and Their Applications by J.L. Moran-Lopez

New Trends in Magnetism, Magnetic Materials, and Their Applications by J.L. Moran-Lopez

During August 24-27, 1993, approximately 60 scientists from the Americas, Europe and Japan, gathered in the city of Guanajuato, in the state of Guanajuato, Mexico, at the II Latin American Workshop on Magnetism, Magnetic Materials and their Applications. The group of scientists converging into the beautiful city of Guanajuato had come from Argentina, Chile, Brazil, Venezuela, Cuba, several places in Mexico, U. S. A. , Japan, Spain, France, Italy, Germany, Austria, Switzerland, and Denmark. The event attested to the success of the previous Workshop on Magnetism, Magnetic Materials and their Applications, held in Havana, Cuba, in 1991, as well as to the interest, level of activity and quality of the work being carried out in Latin America in the area of magnetism and magnetic materials. Equally important to everyone present was the fact that we had come to honor a friend, Professor L. M. Falicov, on his sixtieth birthday. The choice of a Latin American Workshop on magnetism as a Festschrift for Leo Falicov was, in our opinion, quite appropriate not only because of Leo's strong ties to Latin America, but also because of his superb contributions to science, and in particular, to magnetism. Professor Falicov was born in Buenos Aires, Argentina, where he spent a good part of his formative years.
Magnetic Clusters: Magnetic Properties of Small Transition Metal Clusters in a Molecular Beam (W.A. de Heer, I.M.L. Billas). Magnetic Properties of Transition Metal and Rareearth Metal Clusters (P.J. Jensen, K.H. Bennemann). One and Twodimensional Systems: The Onedimensional Hubbard Model with Attractive U as a Soluble Model for Exciton Bands and Electronhole Droplets (P. Schlottmann). Superlattices and Multilayers: Magnetization Patterns of Exchange Coupled Metallic Multilayers (D. Altbir, M. Kiwi). Surfaces and Interfaces: Spinpolarized Scanning Tunneling Spectroscopy on Fe and Ni (S.F. Alvarado). Alloys and Amorphous Materials: New Trends in Ferrimagnetism (T. Kaneyoshi). Special Techniques and Materials: Lessconventional Magnetic Domain Investigations (M. Schlenker). General Theoretical Developments: Slave Boson Approach to Local Moment Formation in the Hubbard Model (R.M. RibeiroTeixeira, M. Avignon). Concluding Remarks. 39 additional articles. Index.
NLS9781489913364
9781489913364
148991336X
New Trends in Magnetism, Magnetic Materials, and Their Applications by J.L. Moran-Lopez
J.L. Moran-Lopez
New
Paperback
Springer-Verlag New York Inc.
2013-07-01
472
N/A
Book picture is for illustrative purposes only, actual binding, cover or edition may vary.
This is a new book - be the first to read this copy. With untouched pages and a perfect binding, your brand new copy is ready to be opened for the first time
Trustpilot