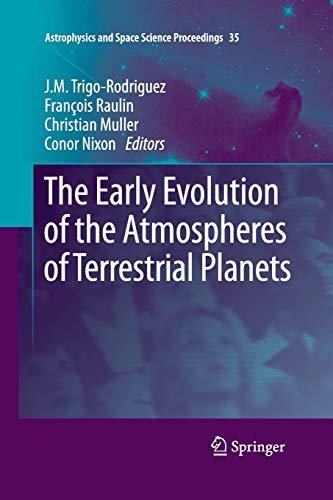 The Early Evolution of the Atmospheres of Terrestrial Planets by J.M. Trigo-Rodriguez

The Early Evolution of the Atmospheres of Terrestrial Planets presents the main processes participating in the atmospheric evolution of terrestrial planets.

The Early Evolution of the Atmospheres of Terrestrial Planets by J.M. Trigo-Rodriguez

The Early Evolution of the Atmospheres of Terrestrial Planets presents the main processes participating in the atmospheric evolution of terrestrial planets. A group of experts in the different fields provide an update of our current knowledge on this topic.

Several papers in this book discuss the key role of nitrogen in the atmospheric evolution of terrestrial planets. The earliest setting and evolution of planetary atmospheres of terrestrial planets is directly associated with accretion, chemical differentiation, outgassing, stochastic impacts, and extremely high energy fluxes from their host stars. This book provides an overview of the present knowledge of the initial atmospheric composition of the terrestrial planets. Additionally it includes some papers about the current exoplanet discoveries and provides additional clues to our understanding of Earth's transition from a hot accretionary phase into a habitable world. All papers included were reviewed by experts in their respective fields.

We are living in an epoch of important exoplanet discoveries, but current properties of these exoplanets do not match our scientific predictions using standard terrestrial planet models. This book deals with the main physio-chemical signatures and processes that could be useful to better understand the formation of rocky planets.

Josep M. Trigo-Rodriguez started at Castello Planetarium in 1990, and spent thirteen years working in the development of programs and public outreach. The last four years he has spent as associate professor at University Jaume I of Castello, giving lectures on Thermodynamics and Physics. In the meantime, Dr. Trigo-Rodriguez obtained his degree in Physics from the University of Valencia in 1997 and his Ph.D. in Theoretical Physics (Astrophysics) in 2002 under the direction of Prof. Jordi Llorca (UPC) and Prof. Juan Fabregat (UV). In 2003 he obtained a Spanish grant that allowed him to continue his career in a postdoctoral position at the Institute of Geophysics & Planetary Physics of UCLA. After almost three years working on primitive meteorites he returned to Barcelona in 2006 with a JdC grant in order to join the Institute of Space Sciences (CSIC-IEEC). In 2009, he won his position as Tenured Scientist of the Consejo Superior de Investigaciones Cientificas (CSIC) at that research institute. (http://www.spmn.uji.es/ESP/trigo.html)

Francois Raulin received his diploma from the Ecole Superieure de Physique et Chimie Industrielles de la Ville de Paris in 1969, and a Doctorat d'Etat (on the role of sulfur in prebiotic chemistry) from the Universite Paris 6 in 1976. He was a research fellow at Carl Sagan's Laboratory, Cornell University, in 1970-71, assistant Professor at University Paris Val de Marne until 1978 and CNRS/NSF post-doctoral fellow at Cyril Ponnamperuma's Laboratory of Chemical Evolution, University of Maryland. F. Raulin is the Co-I of CIRS (Cassini), ACP and GC-MS (Huygens). He is also IDS of the Cassini-Huygens mission (Titan's Chemistry and Exobiology) and Col.I of the COSAC and COSIMA experiments of the Rosetta European cometary mission. He is Deputy team leader of the MOMA experiment of the ExoMars mission.

Dr. Conor Nixon holds a B.A. in Natural Sciences from the University of Cambridge and a Doctorate in Planetary Science from the University of Oxford, where his thesis was entitled 'Remote Sounding of the Atmosphere of Titan.' Since graduating he has worked on the science team of the Cassini spacecraft CIRA instrument at NASA Goddard Space Flight Center in Greenbelt, Maryland. His research interests are focused on understanding the chemistry, dynamics, origin, and evolution of outer planetary atmospheres, in particular Jupiter, Saturn, and Titan.

Christian Muller is a science coordinator and knowledge manager at B.USOC (Belgium Users Support and Operation Center). The B.USOC specializes in support to manned space flight and supports also BELSPO, the Belgian Science Policy Office. In the near future, the B.USOC support will be extended to international treaties outside the science domain as treaties on environment, Antarctica, the ocean and other federal Belgian federal matters. He received his Ph.D. in 1976 under the direction of Prof. Baron Nicolet.

The volume editors have all been involved in planetary science and astrobiology research for several decades. Additionally, the workshop participants that are contributing to this book have remarkable careers, having produced a good number of high-quality written papers under peer-review process, and also provided excellent talks during the workshop.