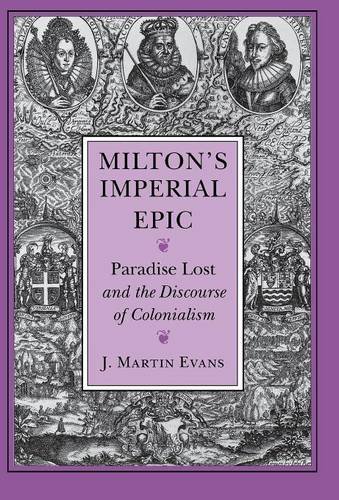 Evans looks at the relationship between Milton's epic and the pervasive colonial discourse of Milton's time.

Written during the crucial first phase of English empire-building in the New World, Paradise Lost registers the radically divided attitudes toward the settlement of America that existed in seventeenth-century Protestant England. Evans looks at the relationship between Milton's epic and the pervasive colonial discourse of Milton's time. Evans bases his analysis on the literature of exploration and colonialism. The primary sources on which he draws range from sermons about the New World justifying colonization and exhorting virtue among colonists to promotional pamphlets designed to lure people and investment into the colonies. Evans's research allows him to create a richly textured picture of anxiety and optimism, guilt and moral certitude.

The central question is whether Milton supported England's colonization or covertly attempted to subvert it. In contrast to those who attribute to Paradise Lost a specific political agenda for the American colonies, Evans maintains that Milton reflects the complexity and ambivalence of attitudes held by English society.

Analyzing Paradise Lost against this background, Evans offers a new perspective on such fundamental issues as the narrator's shifting stance in the poem, the unique character of Milton's prelapsarian paradise, and the moral and intellectual status of Adam and Eve before and after the fall. From Satan's arrival in Hell to the expulsion from the garden of Eden, Milton's version of the Genesis myth resonates with the complex thematics of Renaissance colonialism.

"John Martin Evans provides everything we wanted to know about the discourses of colonialism to which Milton and his contemporary readers were exposed in the seventeenth century, and the ways-often ambiguous or paradoxical-in which they are employed in Paradise Lost.... The book is written with great economy,... its methodology is secure, its illustrative material fascinating, and its argument both clear and subtle, teasing out the paradoxes of Milton's treatment of attitudes towards the colonial enterprise. It is a major contribution towards a fuller understanding of the context and content of Paradise Lost."

J. Martin Evans is Professor of English at Stanford University.

GOR010772635
9780801432118
0801432111
Milton's Imperial Epic: Paradise Lost and the Discourse of Colonialism by J Martin Evans
J Martin Evans
Used - Very Good
Hardback
Cornell University Press
1996-03-07
232
N/A
Book picture is for illustrative purposes only, actual binding, cover or edition may vary.
This is a used book - there is no escaping the fact it has been read by someone else and it will show signs of wear and previous use. Overall we expect it to be in very good condition, but if you are not entirely satisfied please get in touch with us
Trustpilot