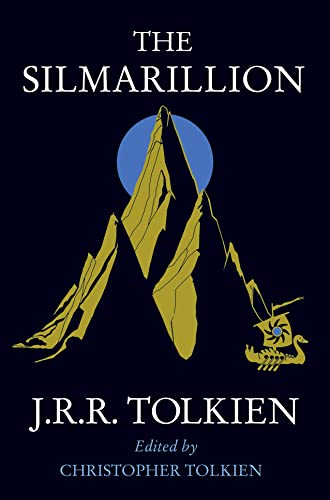 A new B-format edition of this novel, designed to take fans of The Hobbit and The Lord of the Rings deeper into the myths and legends of Middle-earth

A new B-format edition of this novel, designed to take fans of The Hobbit and The Lord of the Rings deeper into the myths and legends of Middle-earth

The Silmarillion is an account of the Elder Days, of the First Age of Tolkien's world. It is the ancient drama to which the characters in The Lord of the Rings look back, and in whose events some of them such as Elrond and Galadriel took part. The tales of The Silmarillion are set in an age when Morgoth, the first Dark Lord, dwelt in Middle-Earth, and the High Elves made war upon him for the recovery of the Silmarils, the jewels containing the pure light of Valinor.

Included in the book are several shorter works. The Ainulindale is a myth of the Creation and in the Valaquenta the nature and powers of each of the gods is described. The Akallabeth recounts the downfall of the great island kingdom of Numenor at the end of the Second Age and Of the Rings of Power tells of the great events at the end of the Third Age, as narrated in The Lord of the Rings.

This pivotal work features the revised, corrected text and includes, by way of an introduction, a fascinating letter written by Tolkien in 1951 in which he gives a full explanation of how he conceived the early Ages of Middle-earth.

'How, given little over half a century of work, did one man become the creative equivalent of a people?' The Guardian

'Demanding to be compared with English mythologies... at times rises to the greatness of true myth' Financial Times

'A creation of singular beauty... magnificent in its best moments' Washington Post

'A grim, tragic, brooding and beautiful book, shot through with heroism and hope... its power is almost that of mysticism'
Toronto Globe & Mail

J.R.R. Tolkien is best known for The Hobbit and The Lord of the Rings, selling 150 million copies in more than 60 languages worldwide. He died in 1973 at the age of 81.
Christopher Tolkien is the third son of J.R.R. Tolkien. Appointed by J.R.R. Tolkien to be his literary executor, he has devoted himself to the publication of his father's unpublished writings, notably The Silmarillion and The History of Middle-earth.

GOR005151546
The Silmarillion by J. R. R. Tolkien
J. R. R. Tolkien
Used - Very Good
Paperback
HarperCollins Publishers
2013-08-01
480
000752322X
9780007523221
N/A
Book picture is for illustrative purposes only, actual binding, cover or edition may vary.
This is a used book - there is no escaping the fact it has been read by someone else and it will show signs of wear and previous use. Overall we expect it to be in very good condition, but if you are not entirely satisfied please get in touch with us.