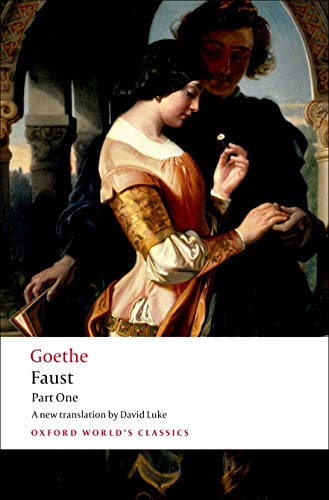 The legend of Faust grew up in the sixteenth century, a time of transition between medieval and modern culture in Germany. Johann Wolfgang von Goethe (1749-1832) adopted the story of the wandering conjuror who accepts Mephistopheles's offer of a pact, selling his soul for the devil's greater knowledge; over a period of 60 years he produced one of the greatest dramatic and poetic masterpieces of European literature. David Luke's recent translation, specially commissioned for The World's Classics series, has all the virtues of previous classic translations of Faust, and none of their shortcomings. Cast in rhymed verse, following the original, it preserves the essence of Goethe's meaning without sacrifice to archaism or over-modern idiom. It is as near an `equivalent' rendering of the German as has been achieved. ABOUT THE SERIES: For over 100 years Oxford World's Classics has made available the widest range of literature from around the globe. Each affordable volume reflects Oxford's commitment to scholarship, providing the most accurate text plus a wealth of other valuable features, including expert introductions by leading authorities, helpful notes to clarify the text, up-to-date bibliographies for further study, and much more.

`Luke has done us all - including, if one may say so, Goethe - a potently good turn. We should take advantage of it.' D.J. Enright, Observer
`a translation "for our time" without signs of strain.' D. J. Enright, The Observer
`At last! A translation of Goethe's masterpiece which reads like a masterpiece in English. David Luke conveys the meaning, intellectual passion and Byronic raciness of the original. This is a poet's as well as a scholar's version, for David Luke has written original poems of great distinction.' Stephen Spender, Spectator
'scrupulous and well-informed, backed up by scholarly clarification of the text's difficult history ... one of the most spirited efforts to capture the great poetic drama' Independent
'a translation of really poetic quality, preceded by an informative introduction and a most useful synopsis of the various stages of composition of the drama ... This reissue is most welcome: for over and above having available for the non-Germanist an English version of this novel.' The Classical Era
'signs of struggle are remarkably few ... The price he pays for rhyming is never too high, and the profits are immense. Michael Hamburger once noted that while Faust had been translated again and again, no single version had established itself as a standard text for the English-speaking world. With his Parts One and Two, both in Oxford University Press World's Classics, Luke has provided us with exactly that.' Times Literary Supplement

GOR002879639
Faust: Part One by J. W. von Goethe
J. W. von Goethe
Oxford World's Classics
Used - Very Good
Paperback
Oxford University Press
2008-05-08
240
019953621X
9780199536214
Winner of Awarded the European Poetry Translation Prize..
Book picture is for illustrative purposes only, actual binding, cover or edition may vary.
This is a used book - there is no escaping the fact it has been read by someone else and it will show signs of wear and previous use. Overall we expect it to be in very good condition, but if you are not entirely satisfied please get in touch with us.