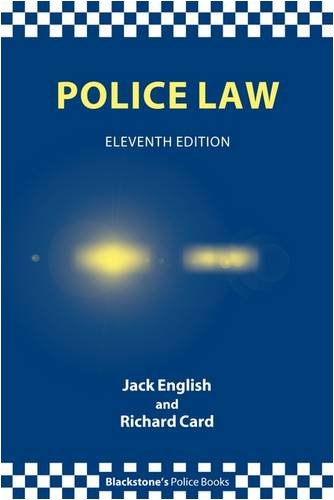 In Stock
$91.99
inc. GST
Now in its eleventh edition, this well-respected book covers all areas of law and legal procedure which are of interest to police officers. A practical and comprehensive volume for everyday use, this edition has been fully updated to include changes to the Fraud Act 2006, the Road Safety Act 2006, and the PACE Codes of Practice.
Very Good
Only 3 left

Now in its eleventh edition, this well-respected and highly regarded book covers all areas of law and legal procedure which are of interest to police officers. Formerly known as Butterworth's Police Law, this edition has been fully revised and updated to include updates to the Fraud Act 2006, the Criminal Justice & Immigration Act 2008, the Corporate Manslaughter & Corporate Homicide Act 2008, the Road Safety Act 2006, the Sexual Offences Act 2003, the Serious Organised Crime and Police Act 2005, and case law in relation to PACE. The book's Terrorism section has also been expanded to include updates to detention periods and references to the Counter-Terrorism Bill (detailing full uses of DNA, post-charge questioning of suspects and foreign travel orders banning convicted terrorists from travelling overseas). New information on the powers available to PCSOs has also been added to this edition. Comprehensive and easy to understand, it is suitable for any reader, even those with no formal legal training. In addition, it will be of particular assistance to all those who are studying Criminal Law for the first time. The book also provides a good source of information for members of the public who wish to refer to a legal text written in an accessible way. This is a practical and comprehensive volume for everyday use which is accompanied by a useful companion website, with quarterly chapter updates.

Jack English is former Assistant Chief Constable with Northumbria Police, Director of the Central Planning and Instructor Training Unit, and Chief Examiner to the Police Promotion Examinations Board. He has authored a number of well-respected police titles and has also written on summonses and charges for the Police Reviewing Company.
Richard Card is formerly Professor of Law and Chairman of the School of Law at De Montford University, Leicester. He has written and lectured extensively in a number of areas of law, particularly criminal law. He is the sole author of Card, Cross and Jones' Criminal Law, and has also written a range of other titles.

GOR003247826
Police Law by Jack English
Jack English
Used - Very Good
Paperback
Oxford University Press
2009-02-19
1376
0199559791
9780199559794
N/A
Book picture is for illustrative purposes only, actual binding, cover or edition may vary.
This is a used book - there is no escaping the fact it has been read by someone else and it will show signs of wear and previous use. Overall we expect it to be in very good condition, but if you are not entirely satisfied please get in touch with us.