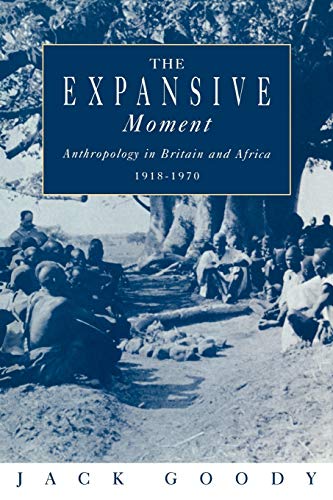 The Expansive Moment
by Jack Goody

Used Price
$36.99
inc. GST
Free Shipping in Australia
Jack Goody's book explores the history of social anthropology in the interwar years. It focuses on key practitioners, such as Malinowski and Fortes, and explores how far ideological approaches adopted by social anthropologists were defined by institutions, particularly in response to colonialism.
Good

The Expansive Moment: The rise of Social Anthropology in Britain and Africa 1918-1970 by Jack Goody

Jack Goody's book explores the development of the discipline of social anthropology through its key practitioners and how far its concerns interacted with the political and ideological debate of the interwar years. It is a study of the different ideological and intellectual approaches adopted by the emerging subject of social anthropology and how far these views were incorporated into and defined by the structures and institutions in which they developed. However it is also an analysis of how far the subject was created by its own response to key issues of the time: colonialism - specifically Africa, anti-Semitism and communism. Goody's approach is characteristically personal: Malinowski dominates the discussion, as well as Fortes, Radcliffe-Brown and Evans-Pritchard, and his own experience, gathered over a wide-ranging life of fieldwork informs the conclusion of the book.

"Goody sheds a new, bright light on the origins and early development of British social anthropology." Choice
"...a valuable contribution to the history of British social anthropology and thus to the general cultural history of Britain in this century....they offer a wonderfully illuminating and provocative account of a central intellectual enterprise in twentieth century Britain." Thomas William Heyck, American Historical Review

Introduction; 1. The economic and organisational basis of British social anthropology in its formative period, 1930-1939: social reform in the colonies; 2. Training for the field: the sorcerer's apprentices; 3. Making it to the field as a Jew and a Red; 4. Personal and intellectual friendships: Fortes and Evans-Pritchard; 5. Personal and intellectual animosities: Evans-Pritchard, Malinowski and others; 6. The Oxford Group; 7. Some achievements of anthropology in Africa; 8. Personal contributions; 9. Concluding remarks; Appendices; Notes; List of references; Index.

GOR010384039
The Expansive Moment: The rise of Social Anthropology in Britain and Africa 1918-1970 by Jack Goody
Jack Goody
Used - Good
Paperback
Cambridge University Press
1995-08-10
244
0521456665
9780521456661
N/A
Book picture is for illustrative purposes only, actual binding, cover or edition may vary.
This is a used book - there is no escaping the fact it has been read by someone else and it will show signs of wear and previous use. Overall we expect it to be in very good condition, but if you are not entirely satisfied please get in touch with us.