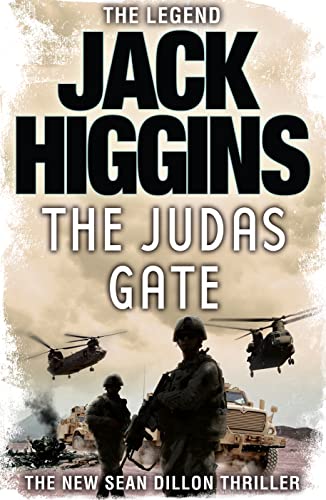 The Judas Gate
by Jack Higgins

Treachery has a price, in the mesmerizing new Sean Dillon thriller from the Sunday Times-bestselling author.

Treachery has a price, in the mesmerizing new Sean Dillon thriller from the Sunday Times-bestselling author.

Helmand Province, Afghanistan: a lone convoy edges its way towards a deserted mountain village, led by US Army Rangers in Mastiff APVs. Stopping to search the area, the Rangers are hit by a massive roadside bomb, and as half the patrol lie dead or injured, the rest are ambushed with military precision. A nearby British medical team responds to the call for back-up, but all are slaughtered when their Chinook helicopter is blown up.

The ambush is bad, but what's worse is that, amidst the battlefield chatter picked up by Major Giles Roper, not all the Taliban voices are Afghan - some are English, and the commander bears an Irish accent; he even names himself 'Shamrock'. Why would he commit such an atrocity, but more importantly can he be found before he masterminds another?

Sean Dillon is put in charge of hunting the traitor down, with all the resources of the 'Prime Minister's private army' at his disposal. The fast and furious plot sweeps the reader from Pakistan to Algeria to London to Paris to Ireland, with many deaths along the way. The stakes are already high for Dillon and company then a familiar, deadly face makes a dramatic reappearance. This time, Dillon will not only be going to war - the war will be coming to him, and he will learn that this Judas has al-Qaeda on his side...

Jack Higgins was a soldier and then a teacher before becoming a full-time writer. `The Eagle Has Landed' turned him into an international bestselling author and his novels have since sold over 250 million copies and been translated into sixty languages. Many of them have also been made into successful films

GOR002308506
The Judas Gate (Sean Dillon Series, Book 18) by Jack Higgins
Jack Higgins
Sean Dillon Series
Used - Very Good
Paperback
HarperCollins Publishers
2010-09-01
368
0007320485
9780007320486
N/A
Book picture is for illustrative purposes only, actual binding, cover or edition may vary.
This is a used book - there is no escaping the fact it has been read by someone else and it will show signs of wear and previous use. Overall we expect it to be in very good condition, but if you are not entirely satisfied please get in touch with us.