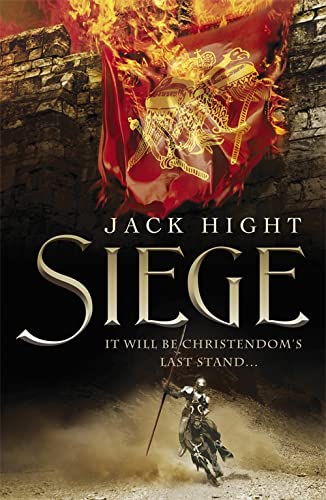 The year is 1453. For more than a thousand years the mighty walls of Constantinople have protected the capital of the Eastern Roman Empire, the furthest outpost of Christianity. But now endless ranks of Turkish warriors cover the plains before them, their massive cannons trained on the ramparts. It is the most fearsome force the world has ever seen. No European army will help: the last crusaders were cut to pieces by the Turks on the plains of Kosovo. Constantinople is on its own. And treachery is in the air.

Three people will struggle to determine the fate of an empire: the young Turkish Sultan, returned from exile and desperate to prove his greatness; a stubborn Byzantine princess, sworn to protect her city; and a mercenary captain with a personal score to settle. But of them, it is the hardened soldier Giovanni Longo who will face the worst choice: just as he prepares to make his final stand, he finds he has something to live for after all.

From the intrigues within the Emperor's household to the Sultan's harem and the savage fights on the battlements, Siege is a full-blooded historical adventure novel in the tradition of Warrior of Rome, Pilgrim or Crusade.

Jack Hight is an American historian with a special interest in the mediaeval era. His fascination with the fall of Constantinople dates from his undergraduate years at Harvard. Jack holds an MA in History from the University of Chicago. He lives in Washington, where he is completing his doctorate.

GOR002339084
Siege by Jack Hight
Jack Hight
Used - Very Good
Paperback
Hodder & Stoughton General Division
2010-11-11
512
1848542968
9781848542969
N/A
Book picture is for illustrative purposes only, actual binding, cover or edition may vary.
This is a used book - there is no escaping the fact it has been read by someone else and it will show signs of wear and previous use. Overall we expect it to be in very good condition, but if you are not entirely satisfied please get in touch with us.