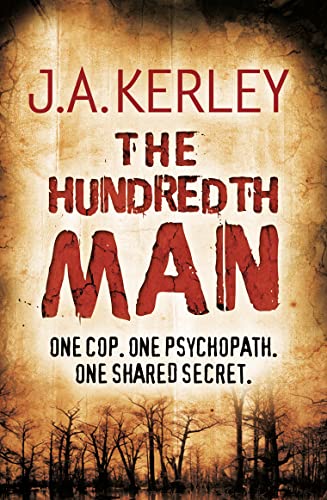 The Hundredth Man
by Jack Kerley

A darkly compelling serial-killer novel introducing the next big name in psychological thrillers and, in Carson Ryder, a fascinating and complex protagonist set for many books to come.

A darkly compelling serial-killer novel introducing the next big name in psychological thrillers and, in Carson Ryder, a fascinating and complex protagonist set for many books to come.

A body is found in the sweating heat of an Alabama night; headless, words inked on the skin. Detective Carson Ryder is good at this sort of thing - crazies and freaks. To his eyes it is no crime of passion, and when another mutilated victim turns up his suspicions are confirmed. This is not the work of a `normal' murderer, but that of a serial killer, a psychopath.

Famous for solving a series of crimes the year before, Carson Ryder has experience with psychopaths. But he had help with that case - strange help, from a past Ryder is trying to forget.

Now he needs it again.

When the truth finally begins to dawn, it shines on an evil so twisted, so dangerous, it could destroy everything that he cares about...

Jack Kerley worked in advertising and teaching before becoming a full-time novelist. He lives in Newport, Kentucky, but also spends a good deal of time in Southern Alabama, the setting for The Hundredth Man. He is married with two children.

GOR001964231
The Hundredth Man (Carson Ryder, Book 1) by Jack Kerley
Jack Kerley
Carson Ryder
Used - Very Good
Paperback
HarperCollins Publishers
2009-11-26
528
0007342292
9780007342297
N/A
Book picture is for illustrative purposes only, actual binding, cover or edition may vary.
This is a used book - there is no escaping the fact it has been read by someone else and it will show signs of wear and previous use. Overall we expect it to be in very good condition, but if you are not entirely satisfied please get in touch with us.