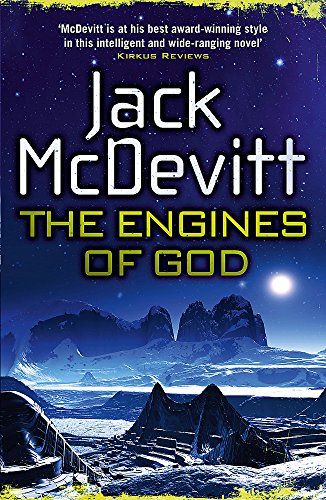 The Engines of God (Academy - Book 1)
by Jack McDevitt

An Arthur C. Clarke Award finalist for Best Novel from the multi-award winning SF master Jack McDevitt. First in the acclaimed Academy series. 'Why read Jack McDevitt? The question should be: Who among us is such a slow pony that s/he isn't reading McDevitt?' Harlan Ellison

The Engines of God (Academy - Book 1) by Jack McDevitt

Two hundred years ago, humans made a stunning discovery in the far reaches of the solar system: a huge statue of an alien creature, with an inscription that defied all efforts at translation.

Now, as faster-than-light drive opens the stars to exploration, humans are finding other relics of the race they call the Monument-Makers - each different, and each heartbreakingly beautiful. But except for a set of footprints on Jupiter's moon Iapetus, there is no trace of the enigmatic race that has left them behind.

Then a team of scientists working on a dead world discover an ominous new image of the Monument-Makers. Somehow it all fits with other lost civilizations, and possibly with Earth's own future. And distant past. But Earth itself is on the brink of ecological disaster - there is no time to search for answers. Even to a question that may hold the key to survival for the entire human race.

Jack McDevitt is that splendid rarity, a writer who is a storyteller first and a science fiction writer second. In his ability to absolutely rivet the reader, it seems to me that he is the logical heir to Isaac Asimov and Arthur C. Clarke -- Stephen King
McDevitt is at his best award-winning style in this intelligent and wide-ranging novel * Kirkus Reviews *
With plenty of startling plot twists, a heavy dose of intrigue, and an unusual amount of character development for science fiction, McDevitt holds us fast right through to a thrilling finish * Booklist *
It's classic SF with a complex but tight plot and an excellent set of characters ... I seem to like this book more each time I read it * SF Reviews *

GOR009858189
The Engines of God (Academy - Book 1) by Jack McDevitt
Jack McDevitt
Academy
Used - Like New
Paperback
Headline Publishing Group
2013-08-15
544
1472203194
9781472203199
N/A
Book picture is for illustrative purposes only, actual binding, cover or edition may vary.
This is a used book - there is no escaping the fact it has been read by someone else and it will show signs of wear and previous use. Overall we expect it to be in very good condition, but if you are not entirely satisfied please get in touch with us.