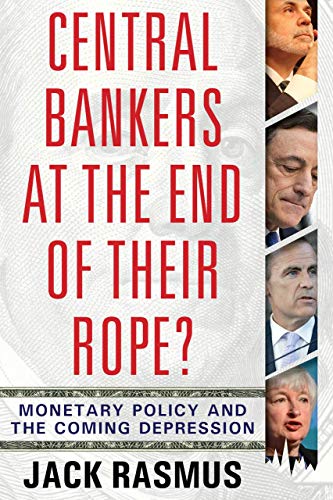 Central Bankers at the End of Their Rope?
by Jack Rasmus

Central Bankers at the End of Their Rope? Summary

Central Bankers at the End of Their Rope?: Monetary Policy and the Coming Depression by Jack Rasmus

Central banks are becoming a force of economic destabilisation in the 21st century - contrary to accepted notions of contemporary economic theory. The basic functions of central banks-whether managing money supply, supervising private banks, bailing out failing banks, stabilising prices, promoting real investment, employment and growth-have all entered a state of increasing decay, breakdown and failure. Central banks globally: have been losing control, individually and collectively, of the global money supply; progressively destabilised the global economy with decades of ever. rising liquidity and debt; chronically failed to prevent financial asset inflation bubbles or stop the steady drift toward deflation in goods, money and labour prices; I have been unable to adapt to technology forces that have fundamentally restructured the global financial system; effectively ignored the growth of- capital markets, inside credit and shadow banking; failed to regulate and supervise private banks that remain, post-2008, still addicted to high risk taking; proved unable to develop policies and tools to effectively stimulate investment, jobs, and real GDP; and failed to construct a stable system to replace the gold standard or the Bretton Woods international monetary systems. The book describes the fundamental causes of the breakdown and emerging crisis of central banks-with primary focus on the Bank of England, the Eurozone's ECB , US Federal Reserve, the Bank of Japan, and the People's Bank of China. The central theme is that central banks, as constituted today, are not only failing their basic functions-in the process becoming more desperate in experimenting with new measures and policies-but have become increasingly the vehicles of the interests of private bankers and investors. Central banks must therefore be democratised to represent the entire economy and not just bankers and investors. Proposals for institutional restructuring are offered as means to ensure central bank independence of both banker-investor interests as well as politicians.

Central Bankers at the End of Their Rope? Reviews

"Rasmus documents the ties of the Federal Reserve to Wall Street and demands democratization of central banking with a series of common sense solutions. A great book. I learned a lot from it." LARRY COHEN, Board of Directors, OUR REVOLUTION
"The most reliable guide to understanding neoliberalism is Jack Rasmus; his book, Central Bankers at the End of Their Rope?, examines the fundamental role of central banks in our new, savage global economy."DAVID BAKER, Z Magazine, October 2017 "Rasmus has succeeded in proving that central banking has not performed its functions during the past decade. Institutional and performance management capacity as well as the perception about the global financial system, which had changed, were lacking. Central Bankers at the End of Their Rope is a book that reveals the context of the world economy, cyclical clashes of economic development, influences, and the imperfections of central banking system configuration."-- Capital & Class
Ambitious, deeply researched, and far reaching in its scope and conclusions, Contagion is actually several books in one. Its summary of what AI is and will likely become is a standalone revelation. It also offers a critique of socio-economic ripple effects that verge on dystopian, and essays and "case studies" of specific sectors or regions, notably a chapter on China's fusion of AI and social control. Finally it proposes solutions for slowing or incorporating the effects while society and governments catch up. One particular eye-opener for this reader was the chapter about historic cycles of so-called "creative destruction," in which economies based on different technologies evolve or transform, cycling through decline and recovery, e.g. the blacksmiths of the horse-and-buggy era shifting to the automobile trade. As David and Daniel Barnhizer explain, however, the AI revolution may leave humans in its dust, with no recovery possible." -- Jeffrey Long, NYT Bestselling author

Dr. Jack Rasmus is the author of several books on the USA and global economy, including Systemic Fragility in the Global Economy 2015; Epic Recession: Prelude to Global Depression, 2010, and Obama's economy, 2012. He hosts the weekly New York radio show and is shadow Federal Reserve Bank chair of the 'Green Shadow Cabinet' and economic advisor to the USA Green Party's presidential candidate, Jill Stein.

GOR010228031
Central Bankers at the End of Their Rope?: Monetary Policy and the Coming Depression by Jack Rasmus
Jack Rasmus
Used - Very Good
Paperback
Clarity Press
2017-08-01
320
0986085391
9780986085390
N/A
Book picture is for illustrative purposes only, actual binding, cover or edition may vary.
This is a used book - there is no escaping the fact it has been read by someone else and it will show signs of wear and previous use. Overall we expect it to be in very good condition, but if you are not entirely satisfied please get in touch with us.