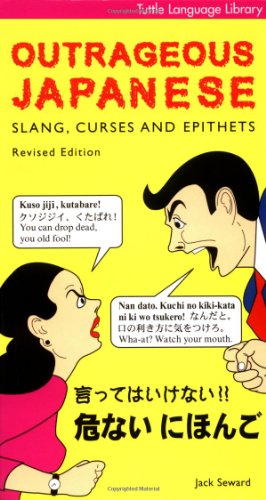 This is a user-friendly and concise Japanese phrase book and guide to Japanese slang and Japanese curses.

The Japanese are extraordinarily polite and soft-spoken people who are always indirect and evasive in their dealings with each other. Right? Well, not really. They can be just as explicit, vicious, vile and downright vulgar as anyone else when they want to be. This little gem of a book teaches you hundreds and hundreds of Japanese language taunts, threats, curses and expletives that you'll never find in any dictionary-showing you how the Japanese really talk to one another when they are angry or emotional. Fun and entertaining, it will help you to read Japanese, write Japanese, and speak Japanese. It leaves no taboo untouched and sets the record completely straight. Learn how to call somebody a lecher, a deadbeat, a tub of lard, (and much worse than we can show here)-and arm yourself with phrases such as "Drop dead" or "what sewer did you crawl out of jackass? Fun and instructive, it is the perfect antidote for those boring language classes you have been taking, and your Japanese friends will die when they hear you trying out new expressions like tonji (pig-child) and dauma–geisha (fat-bottomed geisha). Highlights of this Japanese phrasebook include:

Intended for students of all levels and anyone interested in how Japanese is really spoken, this book is absolutely indispensable for foreigners who live in Japan and want to know what is being said when someone insults you in Japanese!

Since 1941, Jack Seward has been involved with the Japanese language as student, teacher, and author of more than 30 books. In 1986 the Emperor of Japan awarded Seward the Order of the Sacred Treasure, Third Class, for his work. Seward now lives in his native Texas with his Japanese wife.

GOR003424834
Outrageous Japanese: Slang, Curses and Epithets by Jack Seward
Jack Seward
Used - Very Good
Paperback
Tuttle Shokai Inc
2006-09-13
96
4805308486
9784805308486
N/A
Book picture is for illustrative purposes only, actual binding, cover or edition may vary.
This is a used book - there is no escaping the fact it has been read by someone else and it will show signs of wear and previous use. Overall we expect it to be in very good condition, but if you are not entirely satisfied please get in touch with us.