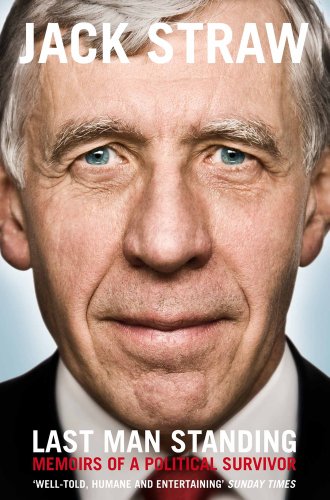 Out of Stock
$17.49
inc. GST
The autobiography of Jack Straw - an MP for thirty-three years and at the heart of government throughout the longest-serving Labour administration in history
Very Good
Only 0 left

As a small boy in Epping Forest, Jack Straw could never have imagined that one day he would become Britain's Lord Chancellor. As one of five children of divorced parents, he was bright enough to get a scholarship to a direct-grant school, but spent his holidays as a plumbers' mate for his uncles to bring in some much-needed extra income. Yet he spent 13 years and 11 days in government, including long and influential spells as Home Secretary and Foreign Secretary. This is the story of how he got there.

His memoirs offer a unique insight into the complex, sometimes self-serving but always fascinating world of British politics and reveals the toll that high office takes, but , more importantly, the enormous satisfaction and extraordinary privilege of serving both your constituents and your country.

Straw's has been a very public life, but he reveals the private face, too and offers readers a vivid and authoritative insight into the Blair/Brown era and, indeed, the last forty years of British politics.

Jack Straw was born in Buckhurst Hill in 1946. Brought up in Loughton, he studied law at Leeds University and practised at the bar before becoming an MP in 1979. He served as Home Secretary, Foreign Secretary and Leader of the House of Commons during Tony Blair's premiership and Secretary of State for Justice and Lord Chancellor under Gordon Brown. Married with two children, he lives in London and his Blackburn constituency.

GOR005605895
Last Man Standing: Memoirs of a Political Survivor by Jack Straw
Jack Straw
Used - Very Good
Paperback
Pan Macmillan
2012-09-27
464
0230768857
9780230768857
Short-listed for The Paddy Power Political Book Awards Political Book of the Year 2013 (UK)
Book picture is for illustrative purposes only, actual binding, cover or edition may vary.
This is a used book - there is no escaping the fact it has been read by someone else and it will show signs of wear and previous use. Overall we expect it to be in very good condition, but if you are not entirely satisfied please get in touch with us.