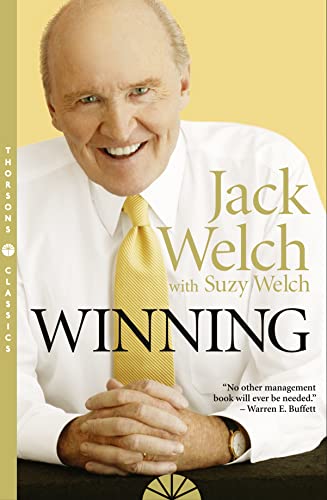 Winning explores the changes of recent times and the new economic realities, and more than that, it identifies the central, immutable principals of doing business right and doing it well.

"Winning is a book for the people in business who sweat, get their nails dirty, hire, fire, make hard decisions, and pay the price when those decisions are wrong," said Welch. "I see this book as a handbook for people in the trenches, turning their companies and the economy around, not just today, but for years to come. I think it will be useful for people just starting their careers or their own businesses to seasoned managers running multi-billion dollar enterprises. I've learned an enormous amount about what works and what doesn't work throughout my career and I'm very excited about sharing it in Winning."

Welch will teach people how to win in business by distilling his experience in three critical areas: working within an organization, dealing with competitors, and handling matters of life and career. Critical to Welch's writing such an accessible, useful guide is his unique collaboration with his wife, Suzy, the former editor of the Harvard Business Review, who brings expertise in management, writing talent and a woman's sensibility to articulating the components of Welch's success.

"Manager of the Century"
- Fortune

"Jack is the Tiger woods of management. All CEOs want to emulate him. They won't be able to, but they'll come closer if they listen carefully to what he has to say"
- Warren Buffett, Chairman, Berkshire Hathaway

"An American treasure, Jack Welch teaches us how a leader with keen intellect, guts, and honor can impart courage to people around him, weather unexpected storms, inspire confidence, and take an organization to greater and greater heights. His formula challenges all of us and any institution striving for excellence."
- Bernadine Healy, M.D., President and CEO, American Red Cross

Jack Welch was chairman and CEO of the General Electric Company from 1981 to 2001. After retiring from GE, Mr. Welch published his autobiography, Jack - Straight from the Gut, a #1 New York Times and international best-seller.

Suzy Welch is the former editor-in-chief of the Harvard Business Review, where she worked from 1995 to 2002. She is the author of numerous articles about leadership, managing change, and corporate culture, and the editor of several books on related topics.

GOR001291691
Winning: The Ultimate Business How-To Book by Jack Welch
Jack Welch
Used - Very Good
Paperback
HarperCollins Publishers
2005-04-04
384
0007197675
9780007197675
N/A
Book picture is for illustrative purposes only, actual binding, cover or edition may vary.
This is a used book - there is no escaping the fact it has been read by someone else and it will show signs of wear and previous use. Overall we expect it to be in very good condition, but if you are not entirely satisfied please get in touch with us.