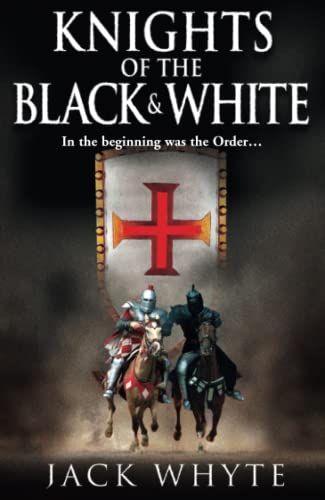 Knights of the Black and White Book One
by Jack Whyte

The exciting first book in a brand new fictional trilogy about the most important events in the history of the Order of the Knights Templar.

Knights of the Black and White Book One Summary

Knights of the Black and White Book One by Jack Whyte

The exciting first book in a brand new fictional trilogy about the most important events in the history of the Order of the Knights Templar.

The Templars represent a widely popular period of history, but the roots of their fellowship have been shrouded in contemporary conspiracy theory and media glamour....this trilogy tells the true tales of the Knights Templar; beginning with why they formed after the First Crusade and why they continued to grow in power and influence.

Immediately after the deliverance of Jerusalem, the Crusaders, considering their vow fulfilled, drifted back to their homes. But some considered that the defence of this precarious conquest, surrounded as it was by Mohammedan neighbours, still remained. In 1118, during the reign of Baldwin II, Hugues de Payens, a knight of Champagne, and eight of his companions bound themselves by a perpetual vow, taken in the presence of the Patriarch of Jerusalem, to defend the Christian kingdom and all god fearing pilgrims who wished to visit the Holy Land. Baldwin accepted their services and assigned them a portion of his palace, adjoining the temple of the city; hence their title "pauvres chevaliers du temple" (Poor Knights of the Temple).

Jack Whyte was born and raised in Scotland, and educated in England and France. He migrated to Canada from the UK, in 1967, as a teacher of High School English, but he only taught for a year before starting to work as a professional singer, musician, actor and entertainer. In the early 1970s, Whyte researched, wrote, directed and appeared in a one man show based on the life and times of Robert Burns, Scotland's national poet.
Whyte's interest in the history of Britain springs from his early Classical education in Scotland during the 1950s, and he has pursued his fascination with those times ever since. Whyte is married, with five adult children, and lives in British Columbia, Canada.

GOR000694924
Knights of the Black and White Book One by Jack Whyte
Jack Whyte
Used - Very Good
Paperback
HarperCollins Publishers
2007-10-01
560
000720745X
9780007207459
N/A
Book picture is for illustrative purposes only, actual binding, cover or edition may vary.
This is a used book - there is no escaping the fact it has been read by someone else and it will show signs of wear and previous use. Overall we expect it to be in very good condition, but if you are not entirely satisfied please get in touch with us.