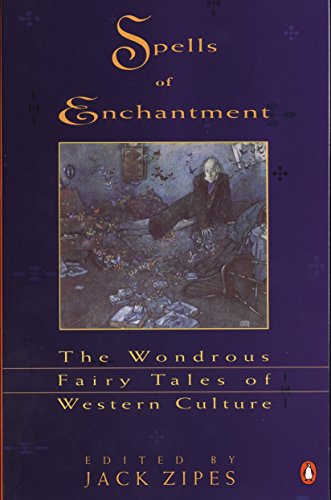 Spells of Enchantment
by Jack Zipes

Out of Stock
$17.49
inc. GST
Zipes brings together the best literary fairy tales ever written, giving readers a sense of the history of the genre and its evolution. Includes more than 60 tales by writers such as Hans Christian Andersen, Wilhelm Grimm, Voltaire, Goethe, Hawthorne, Yeats, Hesse, Thurber, Jane Yolen, Angela Carter, and more. Illustrated.
Very Good
Only 0 left

Spells of Enchantment: The Wondrous Fairy Tales of Western Culture by Jack Zipes

"Spells of Enchantment" brings together the best literary fairy tales ever written, arranged to provide a sense of the history and evolution of this ancient genre. Focusing on the work of the most gifted writers of the great Western literary movements from classical times to the present, Jack Zipes's collection shows how some of literature's most creative minds have tried their hand at mixing the magic ingredients of the fairy tale - and how the genre has been marvelously transformed according to each writer's particular genius.

Including more than sixty tales by such master practitioners of the art as Perrault, Voltaire, Goethe, Hoffmann, Hawthorne, Wilde, Yeats, Hesse, Thurber, Calvino, Philip K. Dick, Robert Coover, and Angela Carter, this authoritative, original, and unique volume is sure to bewitch readers of all ages.

GOR004528151
Spells of Enchantment: The Wondrous Fairy Tales of Western Culture by Jack Zipes
Jack Zipes
Used - Very Good
Paperback
Penguin Books Ltd
1992-12-10
848
0140127836
9780140127836
N/A
Book picture is for illustrative purposes only, actual binding, cover or edition may vary.
This is a used book - there is no escaping the fact it has been read by someone else and it will show signs of wear and previous use. Overall we expect it to be in very good condition, but if you are not entirely satisfied please get in touch with us.