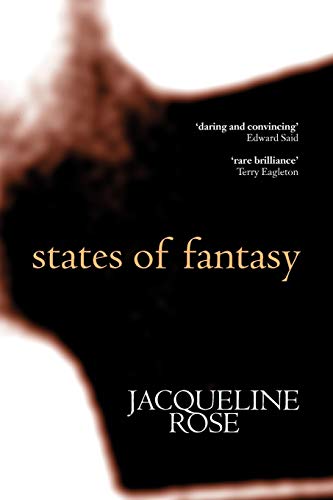 This text argues for an expansion of the boundaries of "English" and the importance of psychoanalysis in understanding literary and historical lives. It also explores the place of Israel/Palestine and South Africa in the English literary and cultural imagination.

States of Fantasy is Jacqueline Rose's much-praised contribution to the current controversy over the limits of English Studies. Arguing for an expansion of the new boundaries of `English', and for the importance of psychoanalysis to the understanding of our literary and historical lives, Rose looks at Israel/Palestine and South Africa, and their place in the English literary and cultural imagination. Jacqueline Rose's fundamental question is the place of fantasy in public and private identities, and in these pages she pushes her investigation further into what might at first glance seem unlikely places. In September 1993, Israel and the PLO signed their first peace treaty; in April 1994, South Africa held its first non-racial democratic elections. States of Fantasy persuasively puts the case that nowhere demonstrates more clearly than these two arenas of historic conflict the need for a psychoanalytically informed understanding of historical process. In so doing, this book shows how the place of England and its writing in those histories emphasize the unbreakable line that runs between literature and politics. Stretching the limits of the `canon' debate, the author offers the strongest rebuttal to critics who try to sever the links between the study of literature and culture and the making and unmaking of the modern world. The central part of this wide-ranging and lively study was originally delivered as the 1994 Clarendon Lectures in Oxford.
Jacqueline Rose, with verve, imagination and ingenuity, argues that fantasy is central to modern politics: it is the psychic glue that holds together our social reality. Rose writes with engaging directness. * New Statesman and Society *
The governing metaphor in Rose's study, deployed with splendid resourcefulness, is of unconscious histories, buried affiliations, broken and rejoined lines of influence...this is a work intimate with the detail of Israeli politics as it is with Jacques Lacan. Rose is an intellectual of the diaspora who, after a long detour through theory, has turned back to base in order to know the place for the first time, in all of its embracing, excluding the difference. * London Review of Books *
It is the great virtue of Jacqueline Rose's new book ... that in it the reader is bracingly confronted with a genuinely innovative and adventurous style of investigating literary texts. Although she writes with in a recognizable psychoanalytic tradition solidly based in Freud, there is no jargon to get past. Rose's argument is both daring and convincing. Above all, I think it is her critical intelligence that impresses one the most. This isn't a mawkish kind of "personal criticism" - autobiographical meanderings through one's soul - but a capably expressed energy that takes her reader through the moral, cultural and psychological experiences that matter most to her. That we, too, feel them as important and consequential is a mark of her achievement. * Times Literary Supplement *
a good and important read, politically engaged, personal and intellectual all in one. * Radical Philosophy 84, July/August 1997 *
States of Fantasy is a brilliant, stimulating book, which exhibits a refreshing disregard for literary canon ... more provocative is its terminological novelty: the book's title heralds a departure from the more conventional 'culture and identity' approach. * Alasdair Pettinger, New Formations, 30 Winter 96/97 *
PART I. THE CLARENDON LECTURES ; PART II. THE LIMITS OF CULTURE
GOR006662602
9780198183273
0198183275
States of Fantasy by Jacqueline Rose (Professor of English, Queen Mary and Westfield College, Professor of English, Queen Mary and Westfield College, University of London)
Jacqueline Rose (Professor of English, Queen Mary and Westfield College, Professor of English, Queen Mary and Westfield College, University of London)
Clarendon Lectures in English
Used - Good
Paperback
Oxford University Press
1998-05-01
198
N/A
Book picture is for illustrative purposes only, actual binding, cover or edition may vary.
This is a used book - there is no escaping the fact it has been read by someone else and it will show signs of wear and previous use. Overall we expect it to be in very good condition, but if you are not entirely satisfied please get in touch with us
Trustpilot