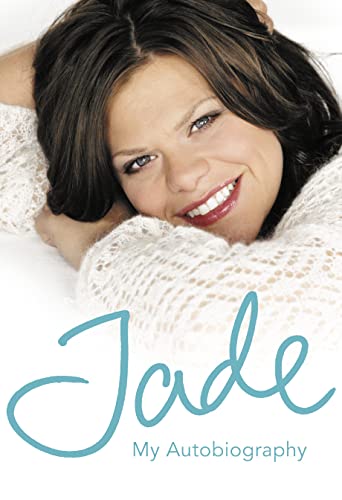 Jade: My Autobiography by Jade Goody

At 24, Jade has had a life that reads more like a soap opera and she now tells her extraordinary story. From being abandoned by her father, to caring for her mother, and bringing up 2 kids on her own, Jade reveals far more than the tabloids have ever known, and her autobiography will have you crying with tears of laughter, sympathy and disbelief.

Jade: My Autobiography by Jade Goody

At 24, Jade has had a life that reads more like a soap opera and she now tells her extraordinary story. From being abandoned by her father, to caring for her mother, and bringing up 2 kids on her own, Jade reveals far more than the tabloids have ever known, and her autobiography will have you crying with tears of laughter, sympathy and disbelief.

From the moment Jade Goody opened her mouth on national TV in 2002, the unofficial winner of Big Brother had already claimed her crown. With such conversational gems as `Where is East Angular? I thought it was abroad', `Rio de Janeiro, ain't that a person?' and `They were trying to use me as an escape goat', it wasn't long before Jade was the most talked about woman in the country.

Three years later and Jade still sells more tabloids and magazines than any reality TV star in history. Every aspect of her life has been a source of fascination - from being abandoned by her father and living with a lesbian mother, to her volatile relationship with her ex-boyfriend Jeff Brazier and even her recent boob job - the national obsession with Jade Goody shows no sign of stopping.

As a young kid growing up in Bermondsey and Peckham, Jade was either in foster care or acting as a 'carer' for her mum Jackiey, who lost the use of her left arm in a motorbike accident. Jade remembers waking up aged six, having to drag her mum out of their burning house when Jackiey's bed caught fire on the candles she had lit hours before.

Such dramas have continued to this very day. In this book Jade talks in full for the first time about her life, from what really went on under the sheets with PJ in the BB house and the mental scars she suffered when the tabloids labelled her `Pig Brother', to meeting Jeff, falling pregnant (twice) and finding a whole heap of celebrity friends.

Heart-rending, hilarious and shockingly revealing, this book will give a fascinating insight into Jade's extraordinary life.

`Love her or hate her, Jade's had an extraordinary life. This book is as shocking as it is compelling ... We'll never look at her in quite the same way again.' **** Heat

'I take my hat off to her for overcoming the sort of tribulations that would have driven most youngsters into mental meltdown. As her autobiography makes clear, her childhood was truly appalling.' Daily Mail

'... another vital source for social historians: not only is it hugely illuminating about our age, but it is also an example of the kind of lens through which we see ourselves.' Daily Telegraph

Born and bred in Bermondsey the former dental nurse turned national treasure and mother of two has remained loyal to Britain's favourite county and continues to be its most talked about resident. She has recently opened a salon, the opening of which in the focus of a new series of LIVINGtv, and continues to appear on a wide variety of television programmes, including Celebrity Wife Swap, Back to Reality and The Weakest Link. Jade is almost a constant fixture in gossip-oriented magazines such as Heat and OK, and her profile just keeps on growing.

GOR011137417
Jade: My Autobiography by Jade Goody
Jade Goody
Used - Like New
Paperback
HarperCollins Publishers
2006-05-02
288
0007231946
9780007231942
N/A
Book picture is for illustrative purposes only, actual binding, cover or edition may vary.
The book has been read, but looks new. The book cover has no visible wear, and the dust jacket is included if applicable. No missing or damaged pages, no tears, possible very minimal creasing, no underlining or highlighting of text, and no writing in the margins
Trustpilot