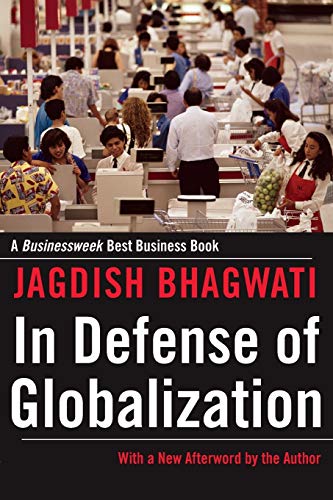 In Defense of Globalization
by Jagdish N. Bhagwati

Out of Stock
$18.49
inc. GST
In the passionate debate over globalization, critics have blamed it for a host of ills afflicting poorer nations, everything from child labor to environmental degradation and cultural homogenization. Now the economist, Bhagwati, reveals that globalization, when properly governed, is in fact the most powerful force for social good in the world today.
Very Good
Only 0 left

In Defense of Globalization Summary

In Defense of Globalization: With a New Afterword by Jagdish N. Bhagwati

In the passionate debate that currently rages over globalization, critics have been heard blaming it for a host of ills afflicting poorer nations, everything from child labor to environmental degradation and cultural homogenization. Now Jagdish Bhagwati, the internationally renowned economist, takes on the critics, revealing that globalization, when properly governed, is in fact the most powerful force for social good in the world today. Drawing on his unparalleled knowledge of international and development economics, Bhagwati explains why the "gotcha" examples of the critics are often not as compelling as they seem. With the wit and wisdom for which he is renowned, Bhagwati convincingly shows that globalization is part of the solution, not part of the problem. This edition features a new afterword by the author, in which he counters recent writings by prominent journalist Thomas Friedman and the Nobel Laureate economist Paul Samuelson and argues that current anxieties about the economic implications of globalization are just as unfounded as were the concerns about its social effects.

In Defense of Globalization Reviews

An outstandingly effective book.... Until further notice In Defense of Globalization becomes the standard general-interest reference, the intelligent layman's handbook, on global economic integration. * The Economist *
Once again, Columbia University economist Jagdish Bhagwati has weighed into the increasingly partisan and ideological debate over trade, offshore outsourcing and globalization. And once again, it is worth listening to.... what's most important about this book is its caution about globalization -namely, that it has to be managed, both in terms of how quickly it proceeds and what policies are put in place to reduce its unpleasant economic and social side effects. * Washington Post *
Bhagwati combines the hard-nosed perspective of a liberal on trade and investment with the soft-hearted sensitivities of a social democrat on poverty and human welfare. He thus has an admirable ability to address patiently and sympathetically globalization's well-meaning but wrong-headed critics.... A cogent, erudite, and, indeed, enjoyable discussion of economic globalization and its discontents. * Foreign Affairs *
One of the world's leading international trade theorists.... Bhagwati takes on many antiglobalist arguments, showing them to be overblown or groundless. The lot of women and children improves with the opening of markets, and the environment too, not to mention the chances for democracy.... Accessible and clearly argued. There is, one might say, a wealth of material on every page. * Bruce Bartlett, The Wall Street Journal *
An important contribution to an often incoherent debate. As we expect of Mr. Bhagwati, it is cogently argued and well written. It sets out a persuasive case in favor of globalization. And because of Mr. Bhagwati's impeccable credentials, there is a better chance his book will be given a fair hearing than might be the case with some other authors. Put simply, Mr. Bhagwati has 'street cred'. * Anne Krueger (Acting Director of the IMF), Financial Times *
Critics of globalization will find a few things to admire in Bhagwati's outlook. He limits his defense of globalization to trade, direct investment and migration. The book's short chapter on capital markets echoes many of the concerns of globalization's critics. Bhagwati forcefully denounces 'the Wall Street-Treasury Complex' that cajoled developing countries into eliminating capital controls. His charming cosmopolitanism will also allay the fears of critics convinced that economists are incapable of appreciating non-economic values. Literary references flow from the pages, from Lady Murasaki to King Lear to Woody Allen. * Daniel W. Drezner, New York Times Book Review *
In this elegant book, one of the world's preeminent economists distills his thinking about globalization for the lay reader.... Armed with a wit uncharacteristic of most writing on economics and drawing on references from history, philosophy and literature as well as some 'state of the art econometric analysis,' he sets out to prove that the antiglobalization movement has exaggerated claims that globalization has done little good for poor countries.... This is a substantial study that is as about as enjoyable and reassuring a work of economics as may be possible to write in this uncertain age. * Publishers Weekly *
Mr. Bhagwati slams through fact after fact, statistic after statistic, demolishing those who claim the poor are worse off because of globalization. He warns that many problems of poor countries are self-inflicted, such as trade barriers against one another. If Mr. Bhagwhati doesn't get a much deserved Nobel Prize for economics, he should get one for literature. His writing sparkles with anecdotes and delightful verbal pictures. * Mike Moore, New York Sun *
Does the international market economy worsen poverty in developing countries? Does it erode democracy? Hurt the cause of women? Trash the environment? Exacerbate the exploitation of child labor? Bhagwati's answers to all these questions make for a supremely worthy read. * Business 2.0 Magazine *
...an excellent and even-handed analytic description of globalization and its side-effects for economists and even non-economists. * Eastern Economic Journal *

Jagdish Bhagwati is University Professor at Columbia University and Senior Fellow in International Economics at the Council on Foreign Relations. He writes frequently for The New York Times, The Wall Street Journal, and The Financial Times and is the author of Free Trade Today, The Wind of the Hundred Days: How Washington Mismanaged Globalization, and A Stream of Windows: Unsettling Reflections on Trade, Immigration, and Democracy. He lives in New York City.

GOR003309579
In Defense of Globalization: With a New Afterword by Jagdish N. Bhagwati
Jagdish N. Bhagwati
Used - Very Good
Paperback
Oxford University Press Inc
2007-09-04
344
0195330935
9780195330939
N/A
Book picture is for illustrative purposes only, actual binding, cover or edition may vary.
This is a used book - there is no escaping the fact it has been read by someone else and it will show signs of wear and previous use. Overall we expect it to be in very good condition, but if you are not entirely satisfied please get in touch with us.