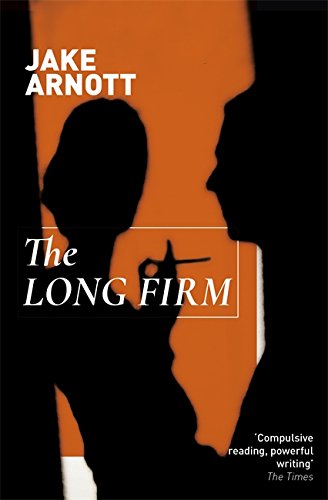 'I'll tell you what happens now,' Harry says, reading my mind. 'You can go now. We're quits. You don't talk to anybody about anything. You've had a taste of what will happen if you do.'

'The Long Firm is more than an addition to the genre: it is both knowing, in a literary sense, and entertaining, and makes profitable use of its influences. Gracefully written, diligently and rewardingly researched, it is both exciting and funny. It takes the cliches of the genre and makes them sexy and freshly interesting'
Observer

Compulsive reading, powerful writing. * The Times *
One of the smartest, funniest and original novels you will read all year ... Arnott is quite brilliant at excavating the cultural minutiae of the time to bring the period vividly to life * Independent on Sunday *
Compulsive reading, powerful writing with an evocative feel for the bleaker side of the Swinging Sixties * The Times *

Gripping ... slumming it doesn't get much better than this * Time Out *

Jake Arnott has created a gangster story every bit as cool, stylish and venomous as the London in which it is set, an English original as sharp and lethal as a Saville Row lapel * Independent on Sunday *

'The Long Firm manages to hook you from the first. It is compulsive reading, powerful writing with an evocative feel for the bleaker side of the swinging Sixties'
The Times

Pulp Fiction so polished as to be immaculate * New Statesman *
The powerful, stylish writing hooks the reader from the first page. One of the most impressive first novels I've read in years. * Mail on Sunday *

'Arnott's epic debut manages to weld the hip prose of James Ellroy to the dives of our capital ... to hark back to the Sixties, to a time when fashionable chicsters rubbed shoulders with East End gangsters ... to remind us that there is nothing more murderous than Englishness itself'
Arena

'Arnott brilliantly captures the gaudy, glamorous, seedy and sordid side of the 60s underworld and show business society. A must-read' Elle
An extraordinarily rich thriller ... raw and often disturbingly detailed ... a story of remarkable originality that stretches far beyond the conventional crime drama in both style and substance. * Publishers Weekly *
Arnott pulls off the amazing feat of making a sadistic 1960s London mob boss fascinating. * Richard Lipez, Washington Post Book World *
Few [homosexual hipster gangsters] have been drawn with as much intellectual savvy and complexity as Jake Arnott's Harry Starks, whose volatile persona fuels The Long Firm with an incendiary tension ... Like Francis Coppola's Godfather trilogy, Arnott invites us to explore the possibility that the allure of the so-called criminal deviance of the homosexual mobster stems not from the notion of the "outsider," but from the more unnerving possibility that the mobster's world is but a microcosm of our own larger society - the "norm," as we like to call it ... Full of gallows humor, careening misadventures and the sharp argot of the perennial wise guy, The Long Firm is fiercely seductive, just the ticket for another trip into our guilty pleasures. * Scott Vickers, Bloomsbury Review *
Astonishing. * Guardian *
ingeniously constructed ... bitterly ironic ... an extravagantly energized narrative leavened by occasional outcroppings of grim humor ... a terrific debut. * Kirkus Reviews *

Strikingly original ... What makes The Long Firm so satisfying is Arnott's eas in seasoning his fiction with real-life events and people, especially the Krays ... the bloodlettign never feels gratuitous: It's truthful to the era and characters. Besides, Arnott doesn't need to rely on cheap shock tactics.
A brazenly confident writer, Arnott perfectly nails 1960s England in all its contradictions. You can practically hear Judy Garland singing an encore of "Over the Rainbow" at teh London Palladium, and smell the gunpowder from Ronnie Kray's pistol after he capped George Cornell in the Blind Beggar pub.

* Renee Graham, Boston Globe *
So richly evocative of seamy, swinging London in the 60s that it makes one ache for the bad old days. Harry Starks [is] an anti-hero to die for ... fast, funny and frenetic. * Ann Prichard, USA Today *
Deliciously seedy ... A storming good read, and Arnott's evocation of gangland London, with its restless violence and patina of glamour, is flawless. * Bethany Schneider, OUT *
This season's hottest new writer ... witty and engaging. * Michael Giltz, The Advocate *
A great read from start to finish, gathering pace and depth as it goes. And that's in the face of the challenging construction Arnott sets himself, involving five first-person narrators who are drawn into the Starks orbit at different stages in his career. Picking up the story, each of them must win us around all over again - and resoundingly do so ... A 60s gangster novel with a compellnig plot, pignant characters and plenty of wit. * Henry Shukman, New York Times Book Review *
Born in 1961, Jake Arnott lives in London. His first novel, The Long Firm, was a major critical and popular success. It was subsequently made into a BBC TV series, which was nominated for two BAFTA awards. His second novel, He Kills Coppers, was also made into a series by Channel 4. He has since published the novels truecrime, Johnny Come Home, The Devil's Paintbrush, The House of Rumour and, most recently, The Fatal Tree.
GOR000410588
The Long Firm by Jake Arnott
Jake Arnott
Used - Very Good
Paperback
Hodder & Stoughton
2000-02-17
352
0340748788
9780340748787
N/A
Book picture is for illustrative purposes only, actual binding, cover or edition may vary.
This is a used book - there is no escaping the fact it has been read by someone else and it will show signs of wear and previous use. Overall we expect it to be in very good condition, but if you are not entirely satisfied please get in touch with us
Trustpilot