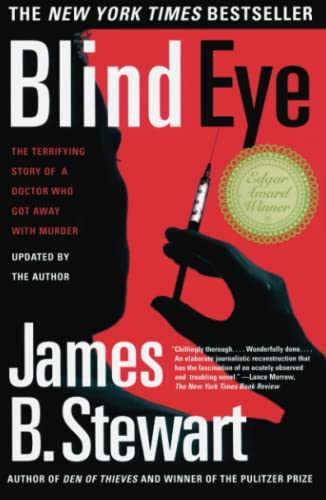 Blind Eye: The Terrifying Story of a Doctor Who Got Away with Murder by James B. Stewart

Shows how an apparently respectable young doctor murdered patients and poisoned co-workers while being consistently protected by an oblivious and dangerously secretive medical establishment.

Blind Eye: The Terrifying Story of a Doctor Who Got Away with Murder by James B. Stewart

A medical thriller from Pulitzer Prize-winning author James B. Stewart about serial killer doctor Michael Swango and the medical community that chose to turn a blind eye on his criminal activities.

No one could believe that the handsome young doctor might be a serial killer. Wherever he was hired--in Ohio, Illinois, New York, South Dakota--Michael Swango at first seemed the model physician. Then his patients began dying under suspicious circumstances.

At once a gripping read and a hard-hitting look at the inner workings of the American medical system, Blind Eye describes a professional hierarchy where doctors repeatedly accept the word of fellow physicians over that of nurses, hospital employees, and patients--even as horrible truths begin to emerge. With the prodigious investigative reporting that has defined his Pulitzer Prize-winning career, James B. Stewart has tracked down survivors, relatives of victims, and shaken coworkers to unearth the evidence that may finally lead to Swango's conviction.

Combining meticulous research with spellbinding prose, Stewart has written a shocking chronicle of a psychopathic doctor and of the medical establishment that chose to turn a blind eye on his criminal activities.

A remarkable piece of reporting.--Scott McLemee "Newsday "
Chillingly thorough....Wonderfully done....An elaborate journalistic reconstruction that has the fascination of an acutely observed and troubling novel.--Lance Morrow "The New York Times Book Review "
Stewart tells a riveting tale of terror, a true page-turner.--Jerome E. Groopman "The Wall Street Journal "
Blind Eye is a flat-out horrifying nonfiction profile of Michael Swango...Stewart is an excellent writer and reporter...This is a brave and passionate book.--Joan O'C. Hamilton "Business Week "
Stewart penetrates the hermetically sealed world of medicine. In the process, he exposes the arrogance and the fraudulent professional courtesies that allowed Swango to move ahead unchallenged. In other words, Stewart does the work that hospital administrators and supervising physicians in Ohio, South Dakota, and New York should have done.--Ellen Clegg "The Boston Globe "
Swango's odyssey is so compelling that I became riveted. I needed to know when and how he would be caught, and what ultimately happened to him.--Dr. Robert B. Daroff "The Plain Dealer (Cleveland) "
Stewart has produced an extraordinary book.--Steve Twedt "Pittsburgh Post-Gazette "
James B. Stewart's Blind Eye is a persuasive case against Dr. Michael Swango.--R. Z. Sheppard "Time magazine "
The facts gathered by Stewart are compelling. [He]...persuasively dissects the medical establishment.--Steve Weinberg "Chicago Tribune "
Is Blind Eye worth reading? Yes, Jim Stewart's books always are.--Joseph Nocera "Fortune "
James B. Stewart is the author of Heart of a Soldier, the bestselling Blind Eye and Blood Sport, and the blockbuster Den of Thieves. A former Page-One editor at The Wall Street Journal, Stewart won a Pulitzer Prize in 1988 for his reporting on the stock market crash and insider trading. He is a regular contributor to SmartMoney and The New Yorker. He lives in New York.
GOR003783254
9780684865638
0684865637
Blind Eye: The Terrifying Story of a Doctor Who Got Away with Murder by James B. Stewart
James B. Stewart
Used - Very Good
Paperback
Simon & Schuster
2000-08-28
334
N/A
Book picture is for illustrative purposes only, actual binding, cover or edition may vary.
This is a used book - there is no escaping the fact it has been read by someone else and it will show signs of wear and previous use. Overall we expect it to be in very good condition, but if you are not entirely satisfied please get in touch with us
Trustpilot