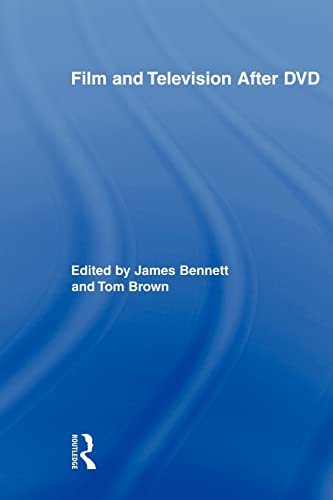 Heralded as "the most significant invention [for film] since the coming of sound" (The Observer 2003), by 2005 DVD players were in approximately 84 million homes in the US, making it the "fastest selling item in history of US consumer electronics market" (McDonald 2007: 135). This book examines the phenomenal growth of DVDs in relation to the cultures, economies, texts, audiences and histories of film, television and new media.

Film and Television After DVD brings together a group of internationally renowned scholars to provide the first focused academic inquiry into this important technology. The book picks up on key issues within contemporary media studies, making a particularly significant contribution to debates about convergence and interactivity in the digital media landscape. Essays consider DVD as a technology that exists outside the boundaries of "new" and "old" media, examining its place within longer histories of home film cultures and production practices of the film and television industries, whilst also critically evaluating what is genuinely "new" about digital media technologies. From DVDs to downloading, peer-to-peer networking and HD-DVD, this book speaks of the rapidly evolving digital mediascape. Ultimately, Film and Television After DVD is a book that considers the convergence of film, television and new media and their academic disciplines through the DVD as a distinct cultural object, pointing to persistent questions in the study of audiovisual culture that will remain intriguing long after the shelf-life of the DVD itself.

James Bennett is Senior Lecturer in Media Studies at London Metropolitan University. His work is primarily concerned with digital television and television stardom. It has appeared in New Review of Film & Television Studies, Multimedia Histories, Studies in Australasian Cinema, Screen, Convergence and Media International Australia (with Niki Strange). Tom Brown is a Lecturer in Film at the University of Reading. His research is focused primarily on the analysis of the relationship between film style and technology, the role of spectacle in French and American "classical" film, and the history of "direct address" in the cinema.

3. The Relationship between DVD, Television Scholarship, and Aesthetics

4. A taste for leeches: DVDs, cultural hierarchies and queer consumption

5. DVD of Attractions? The Lion King and the digital theme park

6. Re-Directing films: Authorship and the DVD

7. The purpose and practice of academic DVD commentaries

8. DVDs and the political economy of attention

NLS9780415878340
9780415878340
0415878349
Film and Television After DVD by James Bennett (London Metropolitan University, UK)
James Bennett (London Metropolitan University, UK)
New
Paperback
Taylor & Francis Ltd
2009-12-17
202
N/A
Book picture is for illustrative purposes only, actual binding, cover or edition may vary.
This is a new book - be the first to read this copy. With untouched pages and a perfect binding, your brand new copy is ready to be opened for the first time
Trustpilot