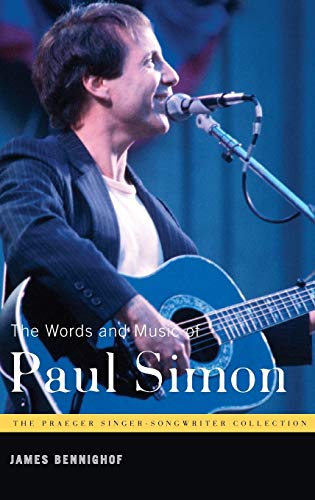 The Words and Music of Paul Simon by James Bennighof

Paul Simon is commonly acknowledged to be one of the most successful singer-songwriters of the pop-rock era. After a brief biographical overview, this title examines Simon's songwriting work, providing a critical discussion of each song. It also discusses the variety of musical elements that contribute significantly to the value of Simon's work.

The Words and Music of Paul Simon by James Bennighof

Paul Simon is commonly acknowledged to be one of the most successful singer-songwriters of the pop-rock era. His work has flourished in the context of Simon and Garfunkel as well as in his own solo career. Starting with the folk-rock style that marked his earliest significant success, he has drawn on a wide variety of influences, including many American traditions and, later, many international ones as well. He has won multiple Grammy awards in both the duo and the solo phases of his career. His songwriting has also provided the impetus for brief forays into film and musical theatre. After providing a brief biographical overview, this work examines Simon's songwriting work in depth, providing a critical discussion of each song as a fusion of text and music so as to help the reader to identify elements that enhance appreciation.

A particularly valuable contribution in this context is the discussion of the wide variety of musical elements that contribute significantly to the value of Simon's work. These include such easily-understandable issues as verse-chorus structure, melodic variation, selection of particular instruments and even performers, variation of musical style within a song, general harmonic characteristics, relationships among keys, rhythm and pacing of text, etc. While the book proceeds chronologically through Simon's recorded output, specific threads are developed throughout, and the discussion of individual songs takes place in the context of these threads, both drawing on them and developing them further. The diversity of Paul Simon's work reflects his very American background, and no discussion of American music is complete without accounting for his influence.

"Released in The Praeger Singer-Songwriter Collection, this volume focuses on how Simon relayed his life through his music. Bennighof looks at important influences and events in the musician's personal history, but only as they relate to his musical production. The coverage of Simon's recording career is well balanced....the volume includes a thorough discography and annotated bibliography. Since no biography of Simon has as yet been published, this book will be an important resource for those interested in Simon and popular music in general. Recommended. Upper-division undergraduates and above; general readers." - Choice
"Bennighof (music theory, Baylor U.) analyzes the music of singer- songwriter Paul Simon, discussing each song and album chronologically within the context of Simon's personal life and the musical and cultural setting. He considers how each song integrates text and music, specifically how the musical setting relates the text through form, style, harmonic structure, or other elements. He concludes with a brief analysis of Simon's creative identity, aesthetic perspective, and compositional methods. Both general readers and musicians could find the book accessible; an explanation of the musical elements the author refers to in the text is included in the appendix." - SciTech Book News

James Bennighof is Professor of Music Theory and Vice Provost for Academic Affairs and Policy at Baylor University. His articles and essays on twentieth-century music theory and composition, and on the analysis of American popular, ragtime, and blues music have appeared in journals such as American Music and the Journal of Music Theory. His choral compositions have been published by Oxford University Press and Heritage Music Press.

GOR007544452
9780275991630
0275991636
The Words and Music of Paul Simon by James Bennighof
James Bennighof
Praeger Singer-Songwriter Collection
Used - Very Good
Hardback
ABC-CLIO
2007-10-30
224
N/A
Book picture is for illustrative purposes only, actual binding, cover or edition may vary.
This is a used book - there is no escaping the fact it has been read by someone else and it will show signs of wear and previous use. Overall we expect it to be in very good condition, but if you are not entirely satisfied please get in touch with us
Trustpilot