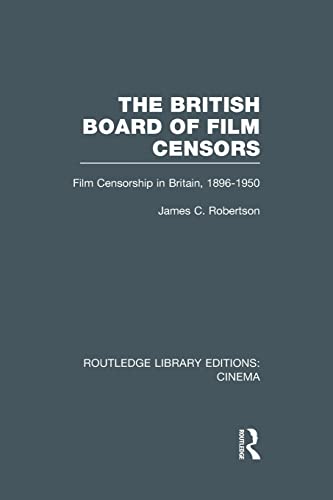 The British Board of Film Censors by James C. Robertson

The British Board of Film Censors: Film Censorship in Britain, 1896-1950 by James C. Robertson

The secrecy in which the British Board of Film Censors enveloped itself until 1948 resulted in a glaring vacuum in British cinematic history. Originally published in 1985, this book filled this important gap, drawing on the detailed registers of films passed, cut and banned since 1913.

The book opens by tracing the events which led up to the creation of the BBFC and goes on to cover the Board's theoretical censorship principles concerning such matters as crime, religion and sex and to discuss how these principles were applied in practice to silent films. The advent of the talkies in the late 1920s caused a minor revolution in the Board's work during the 1930s and 1940s, when the cinema rose to the peak of its popularity. This era of the Board's history is examined in detail, with extensive use of the Board's surviving records and a whole chapter devoted to the special circumstances of the Second World War.