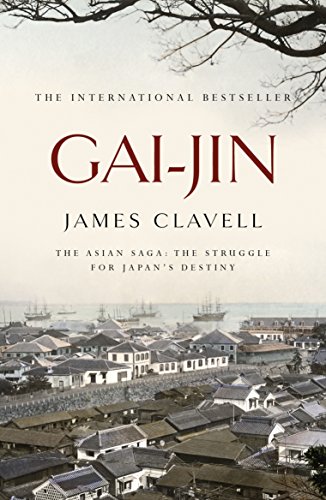 In Stock
$23.49
inc. GST
A repackaged edition of the classic brilliantly-written bestseller about the opening up of 19th Century Japan
Very Good Good Well Read
10 in stock

Gai-Jin: The Third Novel of the Asian Saga by James Clavell

It is 1862 and Japan is a land in chaos as the power of the Shogun wanes and the rival factions plan to restore the Emperor. In Yokohama, the gai-jin, the hated foreigners, seek to profit from the chaos. At the head of the Noble House - and heir to the title of Tai-Pan - stands Malcolm Struan, who is determined to become his own man and marry the woman he loves. At the head of the Shogunate party is the Lord Yoshi, a direct descendant of Shogun Toranaga, who shares all of his ancestor's cunning and ambition.

A passionate portrait of suffering ... a strange and gripping tale of a nation's deflowerment * Nicholas Trelawney, Mail on Sunday *
A grand historical perspective that makes us feel we're understanding how today's Japan came into being . . . absorbing . . . full of rich characters and complicated action * New York Times *
A world of intrigue, violence and betrayal, where the only certainty is that that no-one can be trusted * Daily Telegraph *
GAI-JIN is a major read * Chicago Sun-Times *
A herculean achievement . . . strong plot and strong characterisation * Peter Guttridge, The Times *

James Clavell, the son of a Royal Navy family, was educated in Portsmouth before, as a young artillery officer, he was captured by the Japanese at the Fall of Singapore. It was on this experience that his bestselling novel KING RAT was based. He maintained this oriental interest in his other great works: TAI-PAN, SHOGUN, NOBLE HOUSE and GAI JIN. Clavell lived for many years in Vancouver and Los Angeles, before settling in Switzerland, where he died in 1994.

GOR000826177
Gai-Jin: The Third Novel of the Asian Saga by James Clavell
James Clavell
The Asian Saga
Used - Very Good
Paperback
Hodder & Stoughton General Division
1999-12-02
1232
0340766174
9780340766170
N/A
Book picture is for illustrative purposes only, actual binding, cover or edition may vary.
This is a used book - there is no escaping the fact it has been read by someone else and it will show signs of wear and previous use. Overall we expect it to be in very good condition, but if you are not entirely satisfied please get in touch with us.