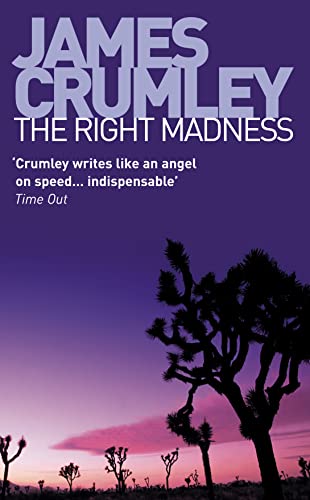 The Right Madness
by James Crumley

The new unputdownable thriller from the author of The Final Country, winner of the CWA Silver Dagger Award 2002.

The Right Madness by James Crumley

The new unputdownable thriller from the author of The Final Country, winner of the CWA Silver Dagger Award 2002.

You're only as tough as you feel. Take private eye C.W. Sughrue, ex-alcoholic and recovering gunshot victim. He thought he knew better than to do any work for Doctor Will "Mac" Mackindrick - even if he is his buddy. But 30,000 big ones does a whole lot of talking. So who's blackmailing Mac? One of his patients maybe?

Sughrue's first day on the job lives up to expectations when the wife of one of Mac's patients ends up headless with a noose round her neck - and Sughrue's pretty certain she won't be the only fatality. In fact, you can count on it. Six patients. That's six bodies...

Praise for The Right Madness:

`Reading Crumely is like hurtling through an assault course. A rare and exhilarating stylist... he is funny, salty and ruthless. One of the marvels of contemporary crime writing. Nobody does it better. It's unlikely that anyone would dare to try.' Literary Review

`The old boy done good as usual. Long may he live!' Independent on Sunday

`This is pulp fiction at its most profane, visceral and poetic' Sunday Times

Praise for The Final Country:

`This is an extraordinary double-barrelled blast from a lost era. It's a two-fisted epic of Texan treachery, packed to the gunwales with sex, drugs, booze and guns.` Independent

`Lyrical, liberal, exciting and humane. Sexy, too, with a generosity that transcends taste and as violent as needs be.' Literary Review

`This complex thriller is so hardboiled it makes Ellroy and Connelly read like Simon and Garfunkel...it's good. Very good' Time Out

James Crumley was born in Three Rivers, Texas and spent most of his childhood in South Texas. He served three years in the US Army before teaching English as a visiting writer at the University of Texas at El Paso.

GOR001664902
The Right Madness by James Crumley
James Crumley
Used - Very Good
Paperback
HarperCollins Publishers
2006-05-31
368
0007130821
9780007130825
N/A
Book picture is for illustrative purposes only, actual binding, cover or edition may vary.
This is a used book - there is no escaping the fact it has been read by someone else and it will show signs of wear and previous use. Overall we expect it to be in very good condition, but if you are not entirely satisfied please get in touch with us.