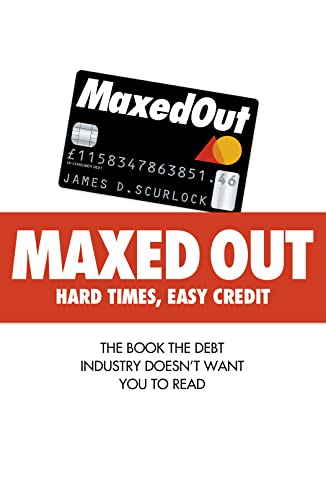 Maxed Out
by James D. Scurlock

Scaldingly honest, impeccably researched and movingly written, `MAXED OUT' is, as `FAST FOOD NATION' was to the food industry, the book the captains of the debt industry wish you would never read.

Scaldingly honest, impeccably researched and movingly written, `MAXED OUT' is, as `FAST FOOD NATION' was to the food industry, the book the captains of the debt industry wish you would never read.

`Maxed Out' is a groundbreaking work that targets the debt industry and how it is fundamentally re-shaping our lives through misleading, unethical, insidious and sometimes illegal practices designed to bury us under ever higher amounts of debt.

The book provides a fascinating and shocking look at how today's credit merchants are trying to get virtually everyone into the credit game. Although the poor are especially targeted by the industry in the hopes that they will become lifelong credit addicts, everyone from university students to grandmothers are under assault from debt companies offering easy access to all the material comforts we can imagine, with our dreams just a swipe away from coming true.

`Maxed Out' shows how, you, the average citizen is courted, wooed and tempted every day into buying something on credit, as well as what happens when the day arrives when you can no longer make your minimum monthly payment.

`With equal measures of righteous outrage and sardonic wit, Scurlock illuminates the dark side of capitalism by examining the worst abuses of the consumer-lending industry.' Variety

`Takes a scathing look at the lending industry and reveals the tragic consequences of excessive consumer debt.' Newseek

James Scurlock is a young investor-turned filmmaker. An entrepreneur since his university years, James opened several successful restaurants which he later sold. He has also contributed as a freelance writer to several magazines and newspapers. He spent over two years researching and filming a documentary (also titled MAXED OUT) about the credit industry that premiered in March at the South by Southwest Festival.

GOR002310777
Maxed Out: Hard Times, Easy Credit by James D. Scurlock
James D. Scurlock
Used - Very Good
Paperback
HarperCollins Publishers
2007-01-15
256
0007242883
9780007242887
N/A
Book picture is for illustrative purposes only, actual binding, cover or edition may vary.
This is a used book - there is no escaping the fact it has been read by someone else and it will show signs of wear and previous use. Overall we expect it to be in very good condition, but if you are not entirely satisfied please get in touch with us.