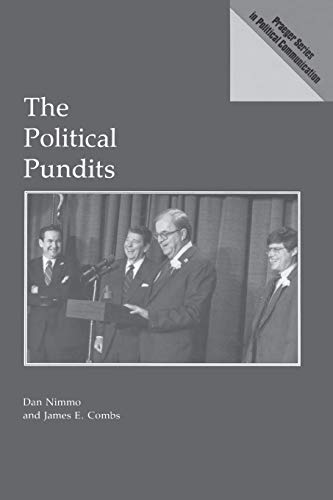 The Political Pundits surveys in detail the small, elite group of persons who comment on and analyze politics in newspapers and newsmagazines, on radio and television, through lectures, books, and all other forms of political media.

The Political Pundits surveys in detail the small, elite group of persons who comment on and analyze politics in newspapers and newsmagazines, on radio and television, through lectures, books, and all other forms of political media. Dan Nimmo and James E. Combs discuss the key political role pundits play, their methods and strategies, and the potential danger they present to American political life. Our democracy is being transformed into a punditocracy, which replaces serious citizen debate with discussion guided by show business values. Punditry, Nimmo and Combs argue, produces symbolic rather than effective healing of political ills, political paternalism rather than political reflection, and, in the end, public disenchantment with politics.

The authors conclude that pundits should not be taken too seriously, and approach their outpourings using a comic, or bardic, framework. In Part One, the discussion focuses on four generic types of pundits: Priests, Bards, Sages, and Oracles. Part Two identifies three pundit roles: as technicians, as members of the Chattering Class, and as media critics. Each chapter provides examples, cases, and profiles to demonstrate the dominance of punditry. The Political Pundits challenges the generally accepted view that learned and informed public discussion in politics provides an adequate forum for informing and involving citizens. Scholars and students of political science and communications will find the role of the pundits demystified--the curtain pulled back to reveal the wizards.

DAN NIMMO is Visiting Scholar, Department of Political Science, Baylor University. He was formerly Professor of Communication at the University of Oklahoma. He has authored or co-authored more than 25 books, including, with James E. Combs, Mediated Political Realities, Subliminal Politics, and A Primer of Politics. He also co-authored, with Larry David Smith, Cordial Concurrence: Orchestrating National Party Conventions in the Telepolitical Age (Praeger, 1991).

JAMES E. COMBS is Professor of Political Science at Valparaiso University. He has authored or co-authored ten books and numerous scholarly articles.

Preface Foreword by Robert E. Denton, Jr. Introduction: From Delphi to Democracy: The Sources of Punditry Traditions of Political Punditry The Priestly Caste: Speaking of, with, and for Political Elites The Bardic Tradition in Political Punditry: Speaking of, to, and for the Populace Sages and Oracles: The Pundits of the Larger View Current Trends in Political Punditry The Technician as Pundit: Campaign and Policy Experts The Chattering Pundits: Talk TV and Radio The Critical Eye: Mediating the Realities of Mediated Politics Conclusion: Democracy or Punditocracy? Bibliography Index
NLS9780275935450
9780275935450
0275935450
The Political Pundits by James E. Combs
James E. Combs
New
Paperback
ABC-CLIO
1992-05-21
224
N/A
Book picture is for illustrative purposes only, actual binding, cover or edition may vary.
This is a new book - be the first to read this copy. With untouched pages and a perfect binding, your brand new copy is ready to be opened for the first time
Trustpilot