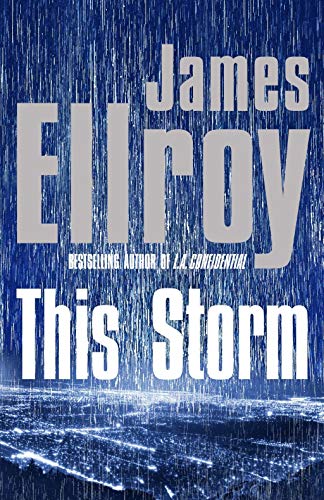 This Storm
by James Ellroy

In Stock
$21.99
+10% GST
From 'one of the great American writers of our time' (Los Angeles Times Book Review) - a brilliant historical crime novel, a pulse-pounding, as-it-happens narrative that unfolds in Los Angeles and Mexico in the wake in Pearl Harbor. There's Fifth Column treason - at this moment, on American soil.
Very Good
Only 1 left

This Storm by James Ellroy

________________________ 'Ellroy writes with raw power ... undeniably one of the most influential crime writers of our time' THE TIMES 'a tangled fever-dream ... Ellroy offers a grandiose, Wagnerian vision of wartime LA' SUNDAY TIMES ________________________ A brilliant historical crime novel, set in Los Angeles and Mexico during the pulse-pounding aftermath of the attack on Pearl Harbor. January, '42. L.A. reels behind the shock of Pearl Harbor. Local Japanese are rounded up and slammed behind bars. Massive thunderstorms hit the city. A body is unearthed in Griffith Park. The cops tag it a routine dead-man job. They're wrong. It's an early-warning signal of Chaos. There's a murderous fire and a gold heist exploding out of the past. There's Fifth Column treason - at this moment, on American soil. There are homegrown Nazis, commies and race racketeers. There's two dead cops in a dive off the jazz-club strip. And three men and one woman have a hot date with History. Elmer Jackson is a corrupt Vice cop. He's a flesh peddler and a bagman for the L.A. Chief of Police. Hideo Ashida is a crime-lab whiz, lashed by anti-Japanese rage. Dudley Smith is a PD hardnose working Army Intelligence. He's gone rogue and gone all-the-way fascist. Joan Conville was born rogue. She's a defrocked Navy lieutenant and a war profiteer to her core. L.A., '42. Homefront madness ascendant. Early-wartime inferno - This Storm is James Ellroy's most audacious novel yet. It is by turns savage, tender, elegiac. It lays bare and celebrates crazed Americans of all stripes. ________________________ `Epic crime writing from a master' DAILY MAIL `Ellroy is unique. There is nobody writing this way ... Nobody has done or is doing what he is doing' BOOKMUNCH

"Ellroy writes with raw power ... James Ellroy writes big ... Ellroy is undeniably one of the most influential crime writers of our time. But can the raw energy of his fiction outweigh the disgustingness and balderdash? Yes; if you see his novels as antidotes to the fake sunshine that Los Angeles, via the big screen, has blown in the world's face for a century." * The Times *
"James Ellroy is one of America's greatest living crime novelists ... This Storm [is] a tangled fever-dream set in 1942 Los Angeles ... Good, unclean fun ... Ellroy offers a grandiose, Wagnerian vision of wartime LA ... Packed with almost every Ellroy obsession under the sun: murder, robbery, rape and torture; small-time corruption and big-time history; sexual intrigue and moral ambivalence; lust, yearning, racism, alcoholism, degeneracy and drug abuse; plastic surgery, prostitution, policemen and paedophilia; scandal, sodomy and sin ... I will live and die an Ellroy fanboy." * Sunday Times *
"Ellroy remains one of the most exciting literary stylists in the English language ... It's been five years since the last novel from the self-described "Demon Dog" of American letters, but it's worth the wait. Like all good jazzmen, Ellroy works very hard indeed to make his music flow so easily." * Guardian *
"James Ellroy writes coarse, prurient, paranoid novels that often turn out to be masterpieces ... Truffling for atrocities in the dirty reality of crime seems to inspire him with a demonic energy that his distinctive telegraphic style is the perfect instrument to convey ... There are some terrific stretches - including an account of the "Battle of Los Angeles", the night in 1942 when a mass delusion arose that the city was under aerial attack - that ranks among his best setpieces." * Daily Telegraph *
"Ellroy has never been a five-pages-before-bed kind of writer; his vision is more the fever dream after lights out." * Observer *

James Ellroy was born in Los Angeles in 1948. He is the author of the acclaimed 'LA Quartet': The Black Dahlia, The Big Nowhere, LA Confidential and White Jazz. His novel Blood's a Rover completes the magisterial 'Underworld USA Trilogy'- the first two volumes of which (American Tabloid and The Cold Six Thousand) were both Sunday Times bestsellers. His most recent novel, Perfidia, is the first instalment in Ellroy's second 'L.A. Quartet'.

GOR010088301
This Storm by James Ellroy
James Ellroy
Used - Very Good
Paperback
Cornerstone
2018-09-06
608
0434020591
9780434020591
N/A
Book picture is for illustrative purposes only, actual binding, cover or edition may vary.
This is a used book - there is no escaping the fact it has been read by someone else and it will show signs of wear and previous use. Overall we expect it to be in very good condition, but if you are not entirely satisfied please get in touch with us.