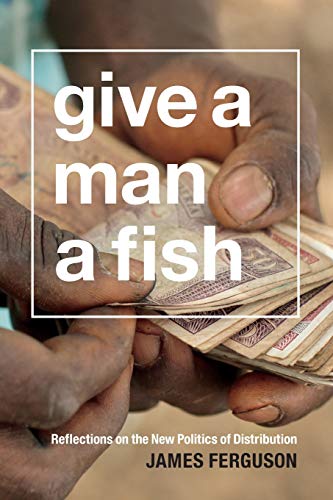 Give a Man a Fish by James Ferguson

James Ferguson examines the rise of social welfare programs in southern Africa in which states give cash payments to their low income citizens. These programs, Ferguson argues, offer new opportunities for political mobilization and inspire new ways to think about issues of production, distribution, markets, labor and unemployment.

Give a Man a Fish: Reflections on the New Politics of Distribution by James Ferguson

In Give a Man a Fish James Ferguson examines the rise of social welfare programs in southern Africa, in which states make cash payments to their low income citizens. More than thirty percent of South Africa's population receive such payments, even as pundits elsewhere proclaim the neoliberal death of the welfare state. These programs' successes at reducing poverty under conditions of mass unemployment, Ferguson argues, provide an opportunity for rethinking contemporary capitalism and for developing new forms of political mobilization. Interested in an emerging "politics of distribution," Ferguson shows how new demands for direct income payments (including so-called "basic income") require us to reexamine the relation between production and distribution, and to ask new questions about markets, livelihoods, labor, and the future of progressive politics.
"Half comparative ethnography, half political pamphlet, Ferguson's impressive narrative is a tour de force questioning, deconstructing and reconstructing classic and contemporary notions of poverty, development and the welfare state in the region and beyond. ... With his creative and flexible analysis, he provokes thinking for action beyond narrow ideological boundaries. One could imagine enthusiastic endorsements of his work by Marxist campaigners, World Bank technocrats and traditional leaders alike. This highly original book is likely to leave a lasting mark not only on contemporary anthropological debates around poverty and development, but also policy and activist thinking in southern Africa and beyond." -- Vito Laterza * Anthropology Book Forum *
"The book offers an exciting challenge to many of the default ways of thinking in development and social policy. ... Give a Man a Fish is a remarkable combination of scholarly breadth, intellectual challenge and grounded reflection on the realities of people living with hardship. Avoiding the easy characterisations of left or right, it is a thoughtful, stimulating and ultimately hopeful book, which deserves to be widely read, discussed and acted on." -- Sarah C. White * Journal of Development Studies *
"This is an extremely important book and one that will no doubt find a wide readership. It challenges conceptions of Africa that see the continent as either falling behind or catching up to the West. It pushes critical scholars to question their productionist bias and take seriously questions of distribution. Perhaps most importantly, it is for something, even if Ferguson's optimism is tentative and provisional." -- Stephen Young * Antipode *
"This fascinating and ground-breaking book is, on the face of it, an enquiry into the new cash transfer programmes which are growing fast in Southern Africa. But in the end it's much more: Ferguson looks deep into the politics of transfers and the way in which they may be linking to demands for a fair share in national wealth. The result is a radical - and practical - agenda for addressing the extreme poverty and inequality that persist in the world today." -- Justin Williams * Development Book Review *
"Overall, this is an ambitious, imaginative, and hopeful book. Although the notion that distributive processes must be understood and appreciated is already widely accepted in African studies, Ferguson's achievement is in analyzing the dynamism and implications of these claims and relations within his chosen region's shifting political economy." -- A. Peter Castro * Journal of International and Global Studies *
"[T]he book is beautifully written, and a pleasure to read. Ferguson seamlessly weaves together data, a wide range of social science literature, anecdotes, historical details, and a sprinkling of anthropological theory.... Ferguson's book is an erudite, enjoyable, and important synthesis of facts, stories and ideas, bridging a wide range of topics around the rise of social grants in Southern Africa." -- E. Fouksman * Basic Income Studies *
"James Ferguson's latest book makes an important contribution to the basic income literature. The book draws its empirical ballast from cash transfer programs in southern Africa, but this is not an ethnographic text; rather, Ferguson leverages the idea of cash transfers and basic income to launch a theoretical meditation on the nature of money, value, society, welfare, justice, and the state. The end product is reflective, thought-provoking, and beautifully written. One is left with the distinct impression that Ferguson is feeling his way into a social theory of the future." -- Jason Hickel * Anthropological Forum *
"Like the best kind of anthropology, James Ferguson's latest book, Give a Man a Fish, invites readers to see the world differently, questions taken-for-granted truisms, and reasserts the significance of lives considered peripheral to the concerns of powerful elites.... In a world of radical inequality and chronic unemployment, few development agents are willing to spend time 'translating' anthropology into action. Ferguson has done this work with the sensibility of an anthropologist." -- Ilana van Wyk * American Anthropologist *
James Ferguson is Susan S. and William H. Hindle Professor in the School of Humanities and Sciences and Professor in the Department of Anthropology at Stanford University. He is the author of Global Shadows: Africa in the Neoliberal World Order and the coeditor of Culture, Power, Place: Explorations in Critical Anthropology, both also published by Duke University Press.
Foreword / Thomas Gibson vii

Introduction. Cash Transfers and the New Welfare States: From Neoliberalism to the Politics of Distribution 1

1. Give a Man a Fish: From Patriarchal Productionism to the Revalorization of Distribution 35

2. What Comes after the Social? Historicizing the Future of Social Protection in Africa 63

3. Distributed Livelihoods: Dependence and the Labor of Distribution in the Lives of the Southern African Poor (and Not-So-Poor) 89

4. The Social Life of Cash Payments: Money, Markets, and the Mutualities of Poverty 119

5. Declaration of Dependence: Labor, Pesonhood, and Welfare in Southern Africa 141

Conclusion. What Next for Distributive Politics? 191

Index 259
NGR9780822358862
9780822358862
0822358867
Give a Man a Fish: Reflections on the New Politics of Distribution by James Ferguson
James Ferguson
The Lewis Henry Morgan Lectures
New
Paperback
Duke University Press
2015-05-20
280
N/A
Book picture is for illustrative purposes only, actual binding, cover or edition may vary.
This is a new book - be the first to read this copy. With untouched pages and a perfect binding, your brand new copy is ready to be opened for the first time
Trustpilot