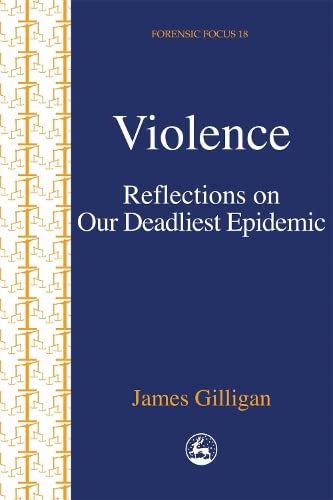 Used Price
$32.99
inc. GST
Free Shipping in Australia
He focuses on how feelings of shame cause violent and vengeful behaviour, argues that conventional punitive legal and penal systems which are based on notions of justice and retribution perpetuate violent behaviour. This ground-breaking book is a read for everyone touched by violence, all those who are working to prevent it and its consequences.
Very Good

Violence: Reflections on Our Deadliest Epidemic by James Gilligan

James Gilligan lays the foundation for a complete re-thinking of the nature and meaning of violence in society. He reveals the motives of men who commit horrifying crimes, men who not only kill other people, but also destroy themselves rather than suffer shame and loss of self-respect.

He focuses on how feelings of shame cause violent and vengeful behaviour, and argues that conventional punitive legal and penal systems which are based on notions of justice and retribution perpetuate violent behaviour. He was called in to the Massachusetts prison system because of the high rates of suicides and murders within state prisons there; when he left these rates had dropped almost to zero. This keenly argued and ground-breaking book is essential reading for everyone touched by violence, and all those who are working to prevent it and its consequences

James Gilligan has written a stunning book about violence. As a psychiatrist who has spent twenty-five years of his professional life treating men who committed murder, Gilligan draws poignantly on his work with prisoners to help us understand what motivates desperate men. In the end, he offers a compelling psychoanalytic explanation of violence while calling on society to take social, economic and cultural measures to help prevent the 'deadly epidemic' from spreading. -- Judith Friedlander, PhD., Dean of the Graduate Faculty of Political and Social Science, New School for Social Research
Dr. Gilligan offers a personal and passionate summing up of his decades of empathic clinical work with men who have committed horrible crimes, and he succeeds in deepening our understanding of their inner lives, the dark world of prisons they inhabit, and the violence that pervades... society. -- Donald J. Cohen, M.D., Director, Yale Child Study Center
Extraordinary. Gilligan's recommendations concerning what does work to prevent violence...are extremely convincing...A wise and careful, enormously instructive book. -- Owen Renik, M.D., editor * Psychoanalytic Quarterly *
Important and absorbing...a valuable book deserving a widespread and thoughtful readership. -- Norval Morris, Boston Globe, former Dean of University of Chicago Law School

GOR003186577
Violence: Reflections on Our Deadliest Epidemic by James Gilligan
James Gilligan
Forensic Focus
Used - Very Good
Paperback
Jessica Kingsley Publishers
1999-09-01
320
1853028428
9781853028427
N/A
Book picture is for illustrative purposes only, actual binding, cover or edition may vary.
This is a used book - there is no escaping the fact it has been read by someone else and it will show signs of wear and previous use. Overall we expect it to be in very good condition, but if you are not entirely satisfied please get in touch with us.