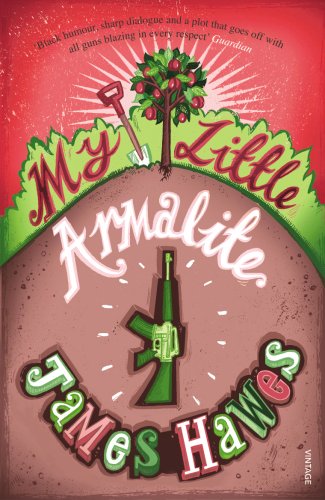 My Little Armalite
by James Hawes

My Little Armalite by James Hawes

John Goode is a leftie lecturer who just wants to give his beloved wife and kids a normal life. You know: north London, good schools, nice neighbours, sash windows... yes, you know. But who can afford that kind of normal these days? Goode can only daydream of becoming a television academic, or else of a bloody great economic crash that would make his job worth something again. So when he stumbles on a long-buried assault rifle whilst planting plum-trees for his children, he soon begins to wonder if this might be just the tool to seriously renegociate his family's future...

"Hawes has developed into a prolifically inventive and increasingly subtle satirist. Though the current novel features all his regular trademarks - black humour, sharp dialogue and a plot that goes off with all guns blazing in every respect - one senses that this book is also Hawes's homage to one of the great academic satires of the last century, Malcolm Bradbury's The History Man" * Guardian *
"Very witty... Both laddish and slyly intelligent, Hawes has his cake and eats it" * Daily Telegraph *
"Terrific black satire" -- Toby Clements * Daily Telegraph *
"Hawes scatters pellets of satirical wit on the twitchy paranoia of the ageing liberal" * Arena *

James Hawes is the author of six novels, including White Powder, Green Light and Speak for England. He lives in Cardiff.

GOR000997376
My Little Armalite by James Hawes
James Hawes
Used - Very Good
Paperback
Vintage Publishing
2009-08-06
368
0099513250
9780099513254
N/A
Book picture is for illustrative purposes only, actual binding, cover or edition may vary.
This is a used book - there is no escaping the fact it has been read by someone else and it will show signs of wear and previous use. Overall we expect it to be in very good condition, but if you are not entirely satisfied please get in touch with us.