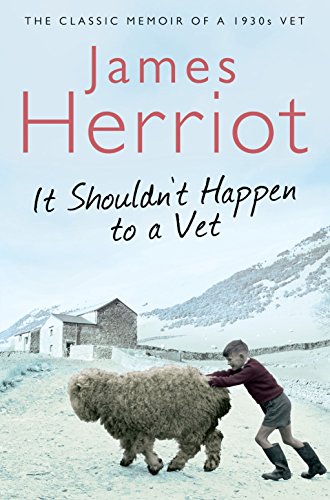 It Shouldn't Happen to a Vet
by James Herriot

In Stock
$11.49
+10% GST
Vet James Herriot is settling in to the Darrowby practice, but he still has plenty to learn . . .
Very Good Good Well Read
9 in stock

It Shouldn't Happen to a Vet Summary

It Shouldn't Happen to a Vet: The Classic Memoir of a 1930s Vet by James Herriot

Lesson number one: When taking a cow's temperature the old-fashioned way, never let go of the thermometer . . .

Now firmly ensconced in the sleepy Yorkshire village of Darrowby, recently qualified vet James Herriot has acclimatized to life with his unpredictable colleagues, brothers Siegfried and Tristan Farnon. But veterinary practice in the 1930s was never going to be easy, and there are challenges on the horizon, from persuading his clients to let him use his `modern' equipment, to becoming an uncle (to a pig called Nugent). Throw in his first encounters with Helen, the beautiful daughter of a local farmer, and this year looks to be as eventful as the last...

From the author whose books inspired the BBC series All Creatures Great and Small, It Shouldn't Happen to a Vet is the second volume of James Herriot's classic memoirs; a book for all those who find laughter and joy in animals, and who know and understand the magic and beauty of Britain's wild places.

It Shouldn't Happen to a Vet Reviews

I grew up reading James Herriot's books and I'm delighted that thirty years on, they are still every bit as charming, heartwarming and laugh-out-loud funny as they were then. -- Kate Humble
He can tell a good story against himself, and his pleasure in the beauty of the countryside in which he works is infectious. * Daily Telegraph *
Full of warmth, wisdom and wit. * The Field *

GOR002688106
It Shouldn't Happen to a Vet: The Classic Memoir of a 1930s Vet by James Herriot
James Herriot
Used - Very Good
Paperback
Pan Macmillan
2010-06-24
288
033051816X
9780330518161
N/A
Book picture is for illustrative purposes only, actual binding, cover or edition may vary.
This is a used book - there is no escaping the fact it has been read by someone else and it will show signs of wear and previous use. Overall we expect it to be in very good condition, but if you are not entirely satisfied please get in touch with us.