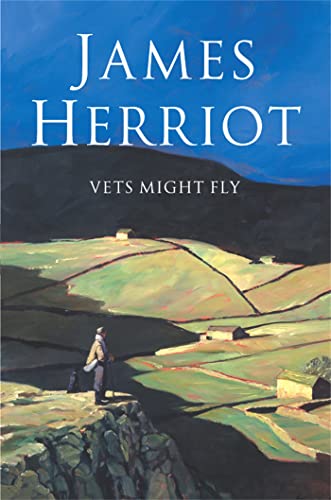 In Stock
$13.49
inc. GST
RAF training proves tough for James - but you can't keep a good vet down.
Very Good Good
Only 4 left

A few months of married bliss, a lovers' nest in Darrowby and the wonders of home cooking are rudely interrupted for James Herriot by the Second World War.

From the author whose books inspired the BBC series All Creatures Great and Small, Vets Might Fly, James Herriot's fifth volume of memoirs relocates him to a training camp somewhere in England. And in between square pounding and digging for victory, he dreams of the people and livestock he left behind him.

There are funny cases, sad cases, farm animals and pets, downright farmers, ladies of refinement, hard-bitten NCOs and of course, the immortal Siegfried and Tristan. * The Sunday Times *
Another winner... as always hilariously funny. * The Sunday Telegraph *
It is a pleasure to be in James Herriot's company. * Observer *

GOR000535846
Vets Might Fly by James Herriot
James Herriot
Used - Very Good
Paperback
Pan Macmillan
2006-03-29
240
0330443585
9780330443586
N/A
Book picture is for illustrative purposes only, actual binding, cover or edition may vary.
This is a used book - there is no escaping the fact it has been read by someone else and it will show signs of wear and previous use. Overall we expect it to be in very good condition, but if you are not entirely satisfied please get in touch with us.