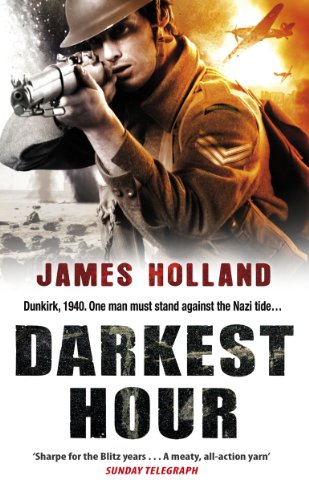 Out of Stock
$18.49
inc. GST
Sergeant Jack Tanner has been posted to a training company on the south-east coast of England where the mysterious deaths of two Polish refugees lead him to believe there has been foul play.
Very Good
Only 0 left

'Holland is a superb historian who knows his stuff, and his descriptions of the action are terrific.' (Daily Telegraph) May 1940. Sergeant Jack Tanner has been posted to a training company on the south-east coast of England where the mysterious deaths of two Polish refugees lead him to believe there has been foul play. As the Germans launch their Blitzkrieg in Europe, the entire company are sent to join the battle to stop Hitler's drive across the Low Countries. Pitted against the die-hard Nazis of the SS 'Death's Head' Division and the great panzer commander, General Rommel himself, it is left to Tanner to get his men back to Allied lines. But if they are to have any hope of surviving the mayhem of Dunkirk, Tanner must first deal with an enemy far more deadly than the Germans...

"Old-fashioned, testosterone-fuelled escapism and Tanner is a chiselled protagonist straight out of the pages of the old Commando comics" * Mail on Sunday *
"Sharpe for the Blitz years...a meaty, all action yarn!" * Sunday Telegraph *
"Holland is a superb historian who knows his stuff, and his descriptions of the action are terrific" * Daily Telegraph *
"Has the sure touch of someone who knows their subject and enjoys it" * Daily Mail *
"This is a well-researched page-turner that keeps you hungry for more. An exciting tale full of historical details and action" * Soldier magazine *

GOR001873485
Darkest Hour: A Jack Tanner Adventure by James Holland
James Holland
Jack Tanner
Used - Very Good
Paperback
Transworld Publishers Ltd
2010-05-27
528
0552773956
9780552773959
N/A
Book picture is for illustrative purposes only, actual binding, cover or edition may vary.
This is a used book - there is no escaping the fact it has been read by someone else and it will show signs of wear and previous use. Overall we expect it to be in very good condition, but if you are not entirely satisfied please get in touch with us.