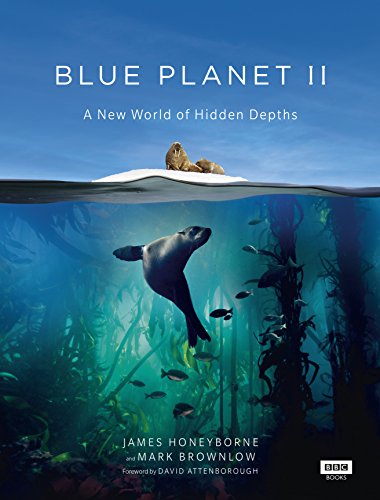 In Stock
$20.99
inc. GST
Blue Planet II, which accompanies an epic 7-part series on BBC1, is a ground-breaking new look at the richness and variety of underwater life across our planet.
Like New Very Good Good Well Read
Only 3 left

Take a deep breath and dive into the mysteries of the ocean. Our understanding of ocean life has changed dramatically in the last decade, with new species, new behaviours, and new habitats being discovered at a rapid rate. Blue Planet II, which accompanies an epic 7-part series on BBC1, is a ground-breaking new look at the richness and variety of underwater life across our planet. From ambush hunters such as the carnivorous bobbit worm to cuttlefish mesmerising their prey with a pulsating light display, Blue Planet II reveals the never-before-seen secrets of the ocean. With over 200 breath-taking photographs and stills from the BBC Natural History Unit's spectacular footage, each chapter of Blue Planet II brings to life a different habitat of the oceanic world. Voyages of migration show how each of the oceans on our planet are connected; coral reefs and arctic ice communities are revealed as thriving underwater cities; while shorelines throw up continual challenges to those living there or passing through. A final chapter explores the science and technology of the Ocean enterprise - not only how they were able to capture these amazing stories on film, but what the future holds for marine life based on these discoveries.

"[A] substantial and awe-inspiring behind-the-scenes look . . . Honeyborne and Brownlow's gorgeous volume should please fans of the series and lovers of the oceans alike." --Publisher's Weekly
"Blue Planet II is the greatest nature series of all time" --The Atlantic
"Nature documentary filmmaking at its finest." "The Planet series remain some of the very few programs that can legitimately be called 'event television.'" "It's a visually astonishing and riveting seven-part collection of images so surreal they almost feel like science fiction." "Something like this doesn't happen overnight or come around very often." --Hollywood Reporter
"But even if you are braced for a glorious production, "Blue Planet II" is likely to take your breath away." "'Blue Planet II' is jaw-dropping." --Variety
." . . what a spectacle to observe!" "Despite the high production values, there's a sense of primal delight, evident in an early scene featuring a pod of dolphins as they ride the waves in the Red Sea." --New York Times
." . . Blue Planet II will be one of your favorite TV events of the year, and its deep dive beneath the waves of the world's oceans will prove both soothing and engaging. Find the highest-definition television you can and some good snacks and settle in. You've got seven whole episodes of jaw-dropping documentary footage to enjoy." --Vox
"this year's most stunning docuseries" --TV Guide Magazine
"An incredibly gorgeous journey from the shores to the depths of the sea." --Reviews by Rachel

James Honeyborne (Author) James Honeyborne, executive producer of Blue Planet II, is the producer and director of award-winning wildlife documentaries for the BBC, Discovery Channel and National Geographic. He was series producer on the BBC's landmark series Africa, narrated by Sir David Attenborough, and his other television credits include Wildlife on One and The Natural World. He is also director of feature-length wildlife drama, Meerkats - The Movie, for Harvey Weinstein/BBC Films. Mark Brownlow (Author) Mark Brownlow is the series producer of Blue Planet II. He was a producer on the BBC's landmark series Planet Earth and has produced many natural history documentaries for the BBC, including Hidden Kingdoms and Ocean Giants.

GOR008761192
Blue Planet II by James Honeyborne
James Honeyborne
Used - Like New
Hardback
Ebury Publishing
2017-10-19
312
1849909679
9781849909679
N/A
Book picture is for illustrative purposes only, actual binding, cover or edition may vary.
This is a used book - there is no escaping the fact it has been read by someone else and it will show signs of wear and previous use. Overall we expect it to be in very good condition, but if you are not entirely satisfied please get in touch with us.