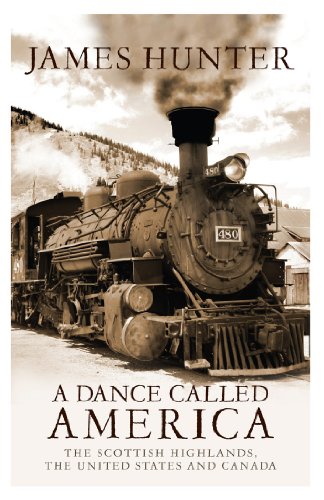 Used Price
$25.49
inc. GST
Free Shipping in Australia
A new dance is devised on the Isle of Skye in the eighteenth century.
Very Good

A Dance Called America: The Scottish Highlands, The United States and Canada by James Hunter

A new dance is devised on the Isle of Skye in the eighteenth century. An exhilarating dance. A dance, one visitor reports, that 'the emigration from Skye has occasioned'. The visitor asks for the dance's name. 'They call it America,' he is told. Now James Hunter, one of Scotland's leading historians, provides the first comprehensive account of what happened to the thousands of people who, over the last 300 years, left Skye and other parts of the Scottish Highlands to make new lives in the United States and Canada. The product both of painstaking research and extensive travels in North America, this is the definitive story of the Highland impact on the New World, the story of how soldiers, explorers, guerrilla fighters, fur traders, lumberjacks and pioneer settlers from the north of Scotland found, on the other side of the Atlantic, freedoms and opportunities denied to them at home.

"A book that should be read by everyone of Highland descent and by any Scot who has more than a passing interest in his or her sense of nationality" * The Herald *
"The definitive story of the Highland impact on the New World" * Scotland Magazine *
"Meticulously researched, these wonderfully evocative studies of bygone eras make fascinating reading for anyone with an interest in Scotland's evolution" * Daily Record *

James Hunter is the author of a number of books on Scottish history, including Culloden and the Last Clansman, Scottish Exodus and Skye: The Island. He lives in Beauly, Inverness-shire.

GOR005267225
A Dance Called America: The Scottish Highlands, The United States and Canada by James Hunter
James Hunter
Used - Very Good
Paperback
Transworld Publishers Ltd
2010-06-03
304
1845965418
9781845965419
N/A
Book picture is for illustrative purposes only, actual binding, cover or edition may vary.
This is a used book - there is no escaping the fact it has been read by someone else and it will show signs of wear and previous use. Overall we expect it to be in very good condition, but if you are not entirely satisfied please get in touch with us.