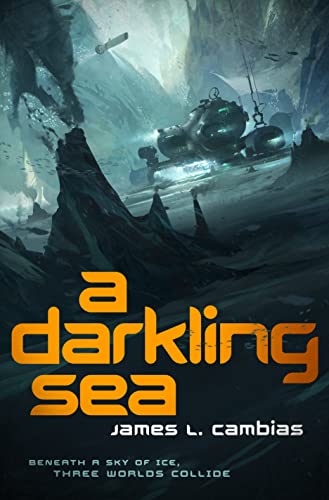 On the planet Ilmatar, under a roof of ice a kilometer thick, a group of deep-sea diving scientists investigates the blind alien race that lives below. The Terran explorers have made a truce with the Sholen, their first extraterrestrial contact. So long as they don't disturb the Ilmataran habitat, they're free to conduct their missions in peace.

On the planet Ilmatar, under a roof of ice a kilometer thick, a group of deep-sea diving scientists investigates the blind alien race that lives below. The Terran explorers have made a uneasy truce with the Sholen, their first extraterrestrial contact. So long as they don't disturb the Ilmataran habitat, they're free to conduct their missions in peace. But when Henri Kerlerec, media personality and reckless adventurer, ends up sliced open by curious Ilmatarans, tensions between Terran and Sholen erupt, leading to a diplomatic disaster that threatens to escalate to war. Against the backdrop of deep-sea guerilla conflict, a new age of human exploration begins as alien cultures collide. Both sides seek the aid of the newly enlightened Ilmatarans. But what this struggle means for the natives - and the future of human exploration - is anything but certain.

"Like Silverberg, who developed fully realized alien societies in such novels as Downward to the Earth (to which this novel bears some thematic resemblance), Cambias makes the Sholen and Ilmataran people and cultures as real as the more familiar human component. Beautifully written, with a story that captures the imagination the way SF should." --Booklist, Starred Review

"This is great fun--traditional science fiction but with today's science. And I love the aliens." --Jo Walton, Hugo, Nebula and World Fantasy Award-winning author of Among Others

"The best story about an alien race and its environment that I've read in a long time. Cambias is in the same league as Hal Clement." --Vernor Vinge, Hugo Award-winning author of A Fire Upon the Deep

"Cambias's exploration of truly alien politics is fast, fun, and packed with characters you'll cheer for. It's exciting to welcome an exuberant new voice to the ranks of hard science fiction!" --Karl Schroeder, author of Ventus

"A compelling read." --Michael Flynn, author of On the Razor's Edge

"A fascinating exploration of alien lives at the extreme edges of an alien world." --Brenda Cooper, award-winning author of The Silver Ship and the Sea

James Cambias has been nominated for the Nebula Award, the James Tiptree Jr. Award, and the 2001 John W. Campbell Award for Best New Writer. He lives in Western Massachusetts. A Darkling Sea is his first novel.
GOR009845711
9780765336286
0765336286
A Darkling Sea by James L. Cambias
James L. Cambias
Used - Very Good
Paperback
Tor Books
2015-06-01
352
N/A
Book picture is for illustrative purposes only, actual binding, cover or edition may vary.
This is a used book - there is no escaping the fact it has been read by someone else and it will show signs of wear and previous use. Overall we expect it to be in very good condition, but if you are not entirely satisfied please get in touch with us
Trustpilot