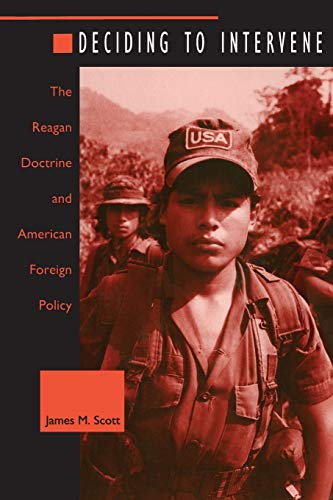 Used Price
$47.99
inc. GST
Free Shipping in Australia
Synthesizes the lessons that can be learned from the Reagan administration's policy and places them within the broad perspective of foreign policy-making
Very Good

Whether to intervene in conflicts in the developing world is a major and ongoing policy issue for the United States. In Deciding to Intervene, James M. Scott examines the Reagan Doctrine, a policy that provided aid to anti-Communist insurgents-or "Freedom Fighters" as President Reagan liked to call them-in an attempt to reverse Soviet advances in Africa, Asia, the Middle East, and Central America. Conceived early in the Reagan presidency as a means to win the Cold War, this policy was later singled out by Reagan and several of his advisors as one of the administration's most significant efforts in the the Cold War's final phase.
Using a comparative case study method, Scott examines the historical, intellectual, and ideological origins of the Reagan Doctrine as it was applied to Afghanistan, Angola, Cambodia, Nicaragua, Mozambique, and Ethiopia. Scott draws on many previously unavailable government documents and a wide range of primary material to show both how this policy in particular, and American foreign policy in general, emerges from the complex, shifting interactions between the White House, Congress, bureaucratic agencies, and groups and individuals from the private sector.
In evaluating the origins and consequences of the Reagan Doctrine, Deciding to Intervene synthesizes the lessons that can be learned from the Reagan administration's policy and places them within the broad perspective of foreign policy-making today. Scott's measured treatment of this sensitive and important topic will be welcomed by scholars in policy studies, international affairs, political science, and history, as well as by any reader with an interest in the formation of American foreign policy.

"I know of no other book that provides such an in-depth examination of the Reagan Doctrine."-James M. Lindsay, University of Iowa

James M. Scott is Associate Professor and Chair of Political Science at the University of Nebraska, Kearney.

Preface ix
1. Introduction 1
2. The Reagan Doctrine: Challenging the Soviet Union in the Third World 14
3. Afghanistan: Consensus, Cooperation, and the Quest for "Rollback" 40
4. Cambodia: Disinterest, Dual Tracks, and the Search for a Settlement 82
5. Angola: Dissensus, Competing Agendas, and the Struggle over Constructive Engagement 112
6. Nicaraguas: Polarization, Stalemate, and the Contra War 152
7. Mozambique: Factions, Fights, and the Rejection of the Reagan Doctrine 193
8. Conclusions: The Nature and Lessons of the Reagan Doctrine 213
Notes 255
References 269
Index 317

GOR005764860
Deciding to Intervene: The Reagan Doctrine and American Foreign Policy by James M. Scott
James M. Scott
Used - Very Good
Paperback
Duke University Press
1996-05-30
352
0822317893
9780822317890
N/A
Book picture is for illustrative purposes only, actual binding, cover or edition may vary.
This is a used book - there is no escaping the fact it has been read by someone else and it will show signs of wear and previous use. Overall we expect it to be in very good condition, but if you are not entirely satisfied please get in touch with us.