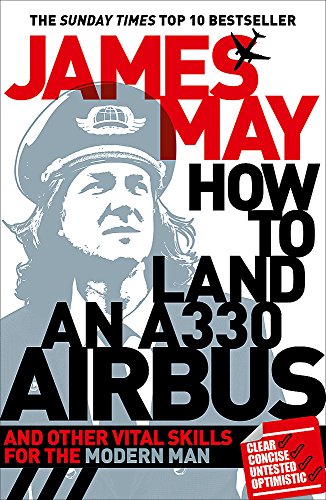 How to Land an A330 Airbus
by James May

Used Price
$11.99
inc. GST
Free Shipping in Australia
The Grand Tour's James May presents his guide to the vital skills every modern man should have.
Reviews:
Trustpilot
Very Good Good

How to Land an A330 Airbus Summary

How to Land an A330 Airbus: And Other Vital Skills for the Modern Man by James May

Being given yet another pointless 'man manual' that told him fifty ways to tie a bow tie in under 30 seconds made James May, co-presenter of The Grand Tour, certain there was a need for another kind of book. This book, in fact.

He reckons there are nine vital things that a chap should be able to do. Not stuff you can download from the internet, but really important things. You never know when you might need to land an A330 Airbus, or deliver twins. And there may well be a moment when being able to play a bit of classical music on the piano is absolutely crucial to your success with women.

So read, learn and be prepared - you'll wonder how you ever lived without it.

Customer Reviews - How to Land an A330 Airbus

How to Land an A330 Airbus Reviews

His tongue-in-cheek technical explanations here will have you howling with laughter. * The Daily Telegraph *
I'd give my 15-year-old son James May's How to Land an A330 Airbus... It's a really funny book. * Anthony Worral Thompson, Sunday Express S Magazine *
Mandatory lavatory reading for a nation of men * Independent on CAR FEVER *
'James May is the best thing ever to come out of Top Gear' * Radio Times *
'Smart, sharply written' * Guardian on JAMES MAY'S MAGNIFICENT MACHINES *
'The most loveable of the Top Gear presenting trio... there's a sharp and interesting mind under the corduroy. Fascinating.' * Nottingham Evening Post on JAMES MAY'S MAGNIFICENT MACHINES *

James May is a writer, broadcaster and co-host of The Grand Tour on Amazon Prime. He has presented series for the BBC, ITV, Channel 4 and Sky. His previous books include James May's Man Lab and Car Fever.

GOR003321506
How to Land an A330 Airbus: And Other Vital Skills for the Modern Man by James May
James May
Used - Very Good
Paperback
Hodder & Stoughton General Division
2011-05-26
256
0340994584
9780340994580
N/A
Book picture is for illustrative purposes only, actual binding, cover or edition may vary.
This is a used book - there is no escaping the fact it has been read by someone else and it will show signs of wear and previous use. Overall we expect it to be in very good condition, but if you are not entirely satisfied please get in touch with us.