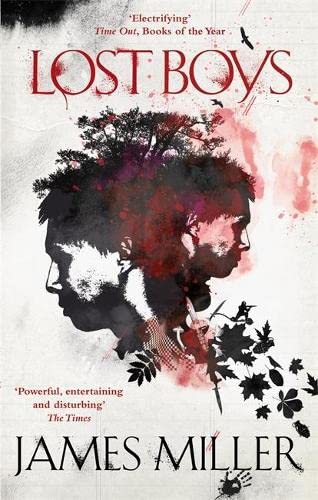 "Forgive me," he sobbed, the tears falling now. He saw them, huddled under the damp trees, faces hidden with scarves and masks. Waiting.'

All over London, affluent and privileged boys are going missing from their homes and schools. Investigations into the disappearances uncover a world of extreme and disturbing fantasy, a violent rejection of all that society values. A father, haunted by his experiences in Iraq, searches for his lost son in the seedy underside of the city. Through a series of fearful revelations, his complicity in the brutal effects of the so-called civilised West.

Shocking and controversial, LOST BOYS sheds light on the secret fears and desires that drive children and adults, families and society. Drawing disconcerting parallels between the childhood resistance to adulthood and the War on Terror, LOST BOYS is an unsettling and unforgettable novel from a major new talent in contemporary fiction.

James Miller's Lost Boys remained in my mind long after I turned the last page. Subject matter is essential in fiction and Miller magnificently fulfills this requirement. He is a formidable writer * Beryl Bainbridge *
A powerful, entertaining and disturbing read. * Francis Gilbert, The Times *
Miller's prose is elegant and assured * Simon Baker, Literary Review *
Sleek and shocking, this is highly intelligent cultural criticism. * WBQ *

James Miller is a writer and academic; he has worked as a tutor in English literature privately and in schools, and currently lectures on twentieth-century American literature at King's College London.

GOR001759893
Lost Boys by James Miller
James Miller
Used - Very Good
Paperback
Little, Brown Book Group
2009-08-06
288
0349120986
9780349120980
N/A
Book picture is for illustrative purposes only, actual binding, cover or edition may vary.
This is a used book - there is no escaping the fact it has been read by someone else and it will show signs of wear and previous use. Overall we expect it to be in very good condition, but if you are not entirely satisfied please get in touch with us.