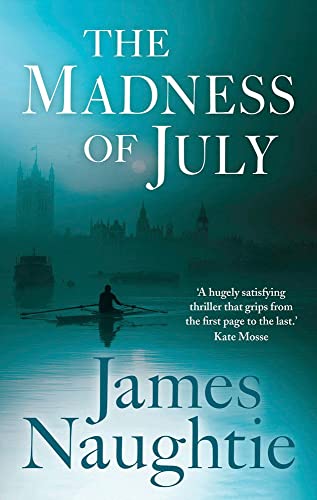 The Madness of July
by James Naughtie

A sophisticated spy thriller, set in the dangerous maze of the Cold War, from Radio 4 presenter and political insider James Naughtie.

The Madness of July Summary

The Madness of July by James Naughtie

From Radio 4's James Naughtie, a sophisticated thriller about loyalty, survival and family rivalry deep in the Cold War, drawing on decades of experience as a political insider in Westminster and Washington.

It is a sweltering July in the mid-1970s, and for Will Flemyng, foreign office minister, the temperature is rising with each passing hour. A mysterious death has exposed secret passions in government, bringing on a political crisis that will draw him back into a familiar world of danger and deceit.

For Flemyng has a past. He was trained as a spy for a life behind enemy lines and now he's compelled to go back. In the course of one long weekend he must question all his loyalties: to his friends, his enemies, and to his own two brothers.

Only then can he expose the truth in London and Washington. When he has walked through the fire.

Customer Reviews - The Madness of July

The Madness of July Reviews

'A sophisticated and hugely satisfying thriller that grips from the first page to the last. A tour de force' Kate Mosse.
'Good writing, vivid scene-setting and knowledgable descriptions from an insider at ease in the corridors of power' Literary Review.
'The book itself is tight lipped; the reader has to piece together a drip-feed of clues - and the process becomes addictive' The Independent.
'Fast-paced ... full of intriguing insights, from a man with 30 years' experience of the corridors of power' Daily Mail.
'Complex and psychologically detailed, I have seldom come across a novel so redolent of le Carre's milieu and technique ... an evocative and eloquent novel' Charles Cumming.
'A clever, intelligent story by someone who knows the territory intimately' Spectator.
'A slow-burning, cerebral and gripping thriller which fuses the entwined professions of politics and espionage' The Herald.
'A complex spy novel which comes with all the convincing insider knowledge you'd expect ... He has a gift for colourful images and smoke screen writing which sustains the tension' Independent on Sunday.
'A lot of fun ... Let's hope we hear more of Will Flemying' Evening Standard.

James Naughtie is one of the best-known broadcasters in the UK. A presenter of Today on BBC Radio 4, and a prize-winning writer, he has written about politics in London and Washington for many years.

GOR005425799
The Madness of July by James Naughtie
James Naughtie
Used - Very Good
Hardback
Head of Zeus
2014-02-27
352
1781856001
9781781856000
N/A
Book picture is for illustrative purposes only, actual binding, cover or edition may vary.
This is a used book - there is no escaping the fact it has been read by someone else and it will show signs of wear and previous use. Overall we expect it to be in very good condition, but if you are not entirely satisfied please get in touch with us.