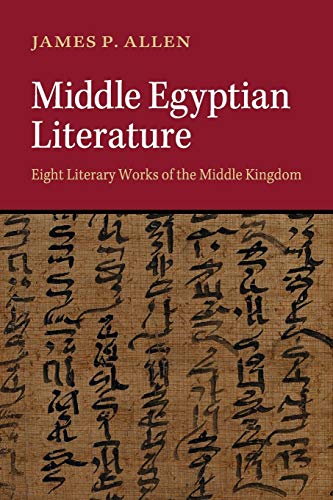 Used Price
$58.99
inc. GST
Free Shipping in Australia
This companion volume to the third edition of the author's popular Middle Egyptian contains eight literary works from the Middle Kingdom, the golden age of Middle Egyptian literature. Included are the compositions widely regarded as the pinnacle of Egyptian literary arts, by the Egyptians themselves and by modern readers.
Reviews:
Trustpilot
Very Good

'A rich resource for students to enhance their reading of eight classics of Middle Egyptian literature in the original language. It will surely become a standard in Middle Egyptian courses.' Mark Collier, University of Liverpool
'A marvellously authoritative and accessible new resource for anyone wanting to read these classics of world literature in the original language.' R. B. Parkinson, University of Oxford
'This book gives the reader access to one of the true surviving treasures of ancient Egypt: Middle Kingdom literary texts, presented in their original wording. An essential companion for students and lovers of ancient literature.' Andreas Stauder, Ecole Pratique des Hautes Etudes, Paris

James P. Allen is the Wilbour Professor of Egyptology at Brown University. He is a former curator of Egyptian art at the Metropolitan Museum of Art in New York and president of the International Association of Egyptologists. His previous publications include Genesis in Egypt: The Philosophy of Ancient Egyptian Creation Accounts (1989), The Heqanakht Papyri (2002), The Ancient Egyptian Pyramid Texts (2005), The Debate between a Man and his Soul (2010), The Ancient Egyptian Language: An Historical Study (2013), and three editions of Middle Egyptian: An Introduction to the Language and Culture of Hieroglyphs, 3rd edition (2014).

Introduction; Text 1. The Story of the Shipwrecked Sailor; Text 2. The Story of Sinuhe; Text 3. The Loyalist Instruction; Text 4. The Instructions of Kagemni's Father and Ptahhotep; Text 5. The Discourses of the Eloquent Peasant; Text 6. The Debate between a Man and his Soul; Text 7. The Herdsman's Tale; Text 8. Hymns to Senwosret III.

GOR009715105
Middle Egyptian Literature: Eight Literary Works of the Middle Kingdom by James P. Allen (Brown University, Rhode Island)
James P. Allen (Brown University, Rhode Island)
Used - Very Good
Paperback
Cambridge University Press
2014-12-18
458
110745607X
9781107456075
N/A
Book picture is for illustrative purposes only, actual binding, cover or edition may vary.
This is a used book - there is no escaping the fact it has been read by someone else and it will show signs of wear and previous use. Overall we expect it to be in very good condition, but if you are not entirely satisfied please get in touch with us.