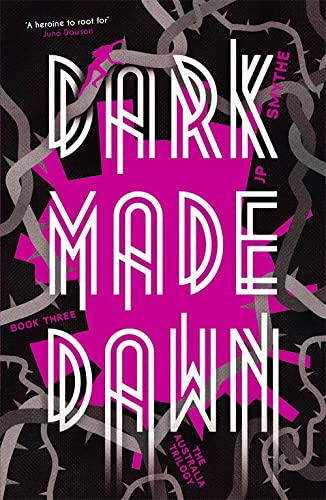 The extraordinary conclusion to the epic Australia Trilogy by JP Smythe, whom the Guardian calls 'a young writer with a preternaturally powerful and distinctive voice.'

IT BEGAN WITH WAY DOWN DARK, SHORTLISTED FOR THE ARTHUR C. CLARKE AWARD.

IT CONTINUED WITH LONG DARK DUSK.

There was one truth on Australia, the derelict ship on which Chan was born and raised: you fight or you die. Usually both.

But everything on Australia was a lie. Abandoned and alone, Chan was forced to live a terrible existence on the fringes of society, Australia's only survivor after a terrible crash-landing on Earth.

But Chan discovered she was not alone. Together with the unlikeliest of allies, Chan carved out a place for herself on Earth. And now the time has come: she's finally found a reason to keep going. But friends have become enemies, and enemies have become something worse. It's time for Chan to create her own truths, and discover a life beyond fighting and death.

A life beyond Australia.

A truly chilling and ruthless world, brilliantly realised * Samantha Shannon on Way Down Dark *
Hard-hitting, lightning-paced and beautifully written, Way Down Dark delivers a thrilling fight for survival in a world where death lurks around every corner. * Will Hill, author of Department 19 *
Darker than Divergent, more brutal than The Hunger Games, Way Down Dark introduces readers to a heroine to root for in a compelling, explosive new YA trilogy. * Juno Dawson, author of Say Her Name *
Way Down Dark is where it's at: an exhilarating if dismaying document that succeeds in the same way Smythe's sinister science fiction has in the past, irrespective of the age of its intended audience. * Tor.com *
Exciting and gripping... a tale of the human spirit and why it's important to carry on fighting. * SFX *

He has been shortlisted for and won any number of prizes, including The Kitschies Red Tentacles and the Arthur C. Clarke Award.

He currently writes a continuing series of articles for The Guardian called Rereading Stephen King and teaches Creative Writing in London. He can be found on twitter @jpsmythe and Facebook.

GOR008663861
9781444796414
1444796410
Dark Made Dawn: Australia Book 3 by James P. Smythe
James P. Smythe
The Australia Trilogy
Used - Very Good
Paperback
Hodder & Stoughton General Division
2017-04-20
320
N/A
Book picture is for illustrative purposes only, actual binding, cover or edition may vary.
This is a used book - there is no escaping the fact it has been read by someone else and it will show signs of wear and previous use. Overall we expect it to be in very good condition, but if you are not entirely satisfied please get in touch with us
Trustpilot