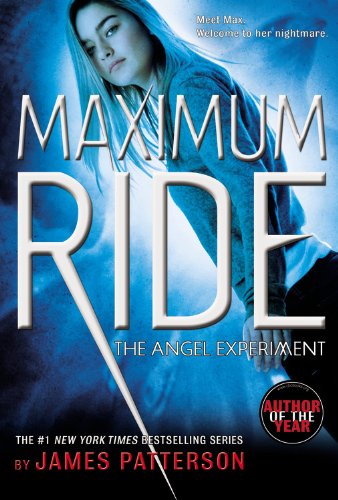 In Stock
$14.49
+10% GST
From Death Valley, California, to the bowels of the New York City subway system, 14-year-old Max leads her feisty "family" on a journey of action, adventure, and soul-seeking in this #1 "New York Times" bestselling series debut.
Very Good Well Read
Only 1 left

Max soars above the world . . . but in James Patterson's thrilling adventure, fantasy can come crashing down to reveal the nightmares of the Angel Experiment.
Maximum Ride and her "flock" -- Fang, Iggy, Nudge, Gasman and Angel -- are just like ordinary kids, only they have wings and can fly. It may seem like a dream come true to some, but their lives can morph into a living nightmare at any time.
Angel, the youngest member of the flock, is kidnapped and taken back to the "School" where she and the others were experimented on by a crew of whack jobs. Her friends brave a journey to blazing hot Death Valley, CA, to save Angel, but soon enough, they find themselves in yet another nightmare: fighting off the half-human, half-wolf "Erasers" in New York City. Whether in the treetops of Central Park or in the bowels of the Manhattan subway system, Max and her adopted family take the ride of their lives.
Along the way, Max discovers that her purpose is save the world. But can she?

"Nonstop action carries this page-turner brilliantly from start to finish."--Kirkus

"Book of the week."--London Times

James Patterson has had more New York Times bestsellers than any other writer, ever, according to Guinness World Records. Since his first novel won the Edgar Award in 1977 James Patterson's books have sold more than 300 million copies. He is the author of the Alex Cross novels, the most popular detective series of the past twenty-five years, including Kiss the Girls and Along Came a Spider. He writes full-time and lives in Florida with his family.

GOR003247342
Maximum Ride: The Angel Experiment by James Patterson
James Patterson
Used - Very Good
Paperback
Little, Brown & Company
2007-04-01
422
0316067954
9780316067959
N/A
Book picture is for illustrative purposes only, actual binding, cover or edition may vary.
This is a used book - there is no escaping the fact it has been read by someone else and it will show signs of wear and previous use. Overall we expect it to be in very good condition, but if you are not entirely satisfied please get in touch with us.