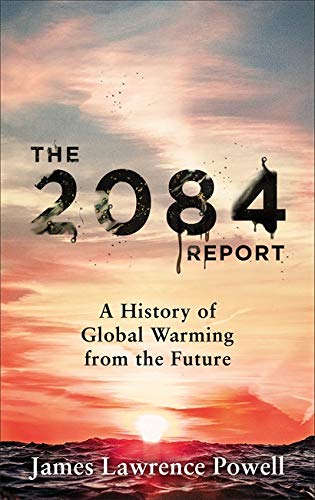 The 2084 Report
by James Powell

Used Price
$23.49
inc. GST
Free Shipping in Australia
The terrifying future of our world after climate change -- as predicted by a leading geochemist
Reviews:
Trustpilot
Like New

The 2084 Report: A History of Global Warming from the Future by James Powell

As his health begins to fail, a historian in the year 2084 sets out to document the irreparable damage climate change has wrought on the planet over the course of his life. He interviews scientists, political leaders and ordinary people all around the world who have suffered its catastrophic effects, from devastating floods and mass droughts to war and famine. In a series of short chapters, we learn that much of New York has been abandoned, 50 million Bangladeshis are refugees and half of the Netherlands is under water.

This is all fiction. But it is rooted in scientific fact.

Written by a professor of geochemistry, James Lawrence Powell, The 2084 Report accurately chronicles the future we will face if nothing is done to address the climate crisis. A vivid portrait of climate change and its tangible impact on our lives, The 2084 Report is a powerful prophecy and urgent call to action.

'This is a sobering and scary (and fascinating) book-a look at where we're going if we don't quickly get our act together. And it's replete with clues about how we could indeed make the changes that would make this fiction, not prophecy' -- Bill McKibben, NEW YORK TIMES bestselling author of FALTER: Has the Human Game Begun to Play Itself Out

James Lawrence Powell is a professor of geochemistry with a PhD from the Massachusetts Institute of Technology. He has written five other books about earth science and climate change, and has several honorary degrees, including Doctor of Science degrees from Berea College and from Oberlin College. He taught Geology at Oberlin College for over 20 years and served as Acting President of Oberlin, President of Franklin and Marshall College, President of Reed College, President of the Franklin Institute Science Museum in Philadelphia, and President and Director of the Los Angeles County Museum of Natural History. He served for 12 years on the National Science Board and in 2015 he was elected a Fellow of the Committee for Skeptical Inquiry (CSI). Asteroid 1987 SH7 is named for him.

GOR011100156
The 2084 Report: A History of Global Warming from the Future by James Powell
James Powell
Used - Like New
Hardback
Hodder & Stoughton
2020-09-01
240
1529311861
9781529311860
N/A
Book picture is for illustrative purposes only, actual binding, cover or edition may vary.
The book has been read, but looks new. The book cover has no visible wear, and the dust jacket is included if applicable. No missing or damaged pages, no tears, possible very minimal creasing, no underlining or highlighting of text, and no writing in the margins.