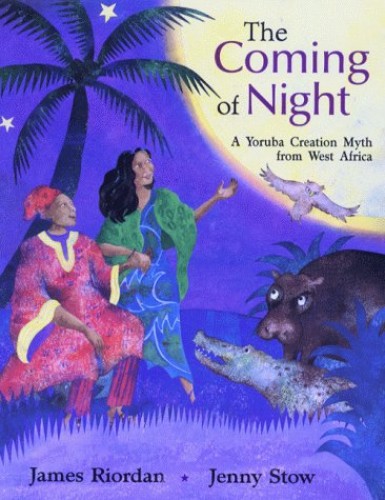 The Coming of Night by James Riordan

This enchanting retelling of a Yoruba tale explains the coming of night to our world.

The Coming of Night: A Yoruba Creation Myth from West Africa by James Riordan

Long, long ago, when the earth was new, the great river goddess Yemoya sent her daughter Aje to marry a handsome earth chief in the Land of Shining Day. At first Aje was happy, but soon she started to pine for the cool shadows of her mother's realm. So her husband asked Crocodile and Hippopotamus to bring Aje a sackful of Night. As they carried it back, the animals heard strange noises coming from the sack - and curiosity finally got the better of them...

James Riordan's retelling of a Yoruba tale, vividly illustrated by Jenny Stow, gives an enchanting explanation of the coming of night to our world.
James Riordan travelled the world collecting folktales and published over thirty volumes of tales from different countries. The Twelve Labours of Hercules won the UK Reading Association Award 1998. He was Emeritus Professor at the University of Surry and Visiting Professor at the University of Worcester, as well as holding honorary degrees from Birmingham, London, Moscow and Grenoble. He regularly reviewed children's books for The Times., and his autobiography, Comrade Jim: the spy who played for Spartak, was published in 2008 by Fourth Estate. He also wrote ten novels for young people. His first, Sweet Clarinet, won the NASEN award in 1999 and was nominated for the Whitbread Prize in 1998. Match of Death won the South Lanarkshire Book Award in 2004, and The Gift was nominated for the NASEN award in 2006. He published a novel on slavery, Rebel Cargo, with Frances Lincoln in 2007. James Riordan died in 2012.

Jenny Stow gained a BA in English and History of Art from Manchester, before going on to study at Chelsea School of Art. Between 1982 and 1985 she spent four years teaching in Africa, followed by a year in the Caribbean in 1987. Jenny is married with one son.

GOR003562636
9780711213784
071121378X
The Coming of Night: A Yoruba Creation Myth from West Africa by James Riordan
James Riordan
Used - Very Good
Paperback
Frances Lincoln Publishers Ltd
2000-04-01
32
N/A
Book picture is for illustrative purposes only, actual binding, cover or edition may vary.
This is a used book - there is no escaping the fact it has been read by someone else and it will show signs of wear and previous use. Overall we expect it to be in very good condition, but if you are not entirely satisfied please get in touch with us
Trustpilot