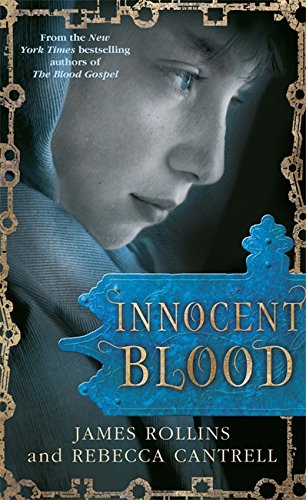 An attack at a ranch in California thrusts archaeologist Erin Granger back into the fold of the Sanguines, an immortal order founded on the blood of Christ and tasked with protecting the world from the beasts haunting its shadows. Following the prophetic words found in the Blood Gospel, a tome written by Christ and lost for centuries, Erin must join forces with Army Sergeant Jordan Stone and Father Rhun Korza to find and protect a boy believed to be an angel.

But an enemy of immense power and terrifying ambition seeks the same child - not to save the world, but to hasten its destruction. For any hope of victory, Erin must discover the truth behind Christ's early years and understand His first true miracle, an event wrapped in sin and destruction that holds the only hope for the world.

Her search will take Erin and the others across centuries and around the world, from the Holy Land to the Arctic Ocean, from the catacombs of Rome to an iron fortress in the Mediterranean Sea, and to the very gates of Hell itself, where their destiny, and the fate of mankind, awaits.

Irresistible. THE DA VINCI CODE meets vampires - BOOKLISTCutting-edge science, ancient history, and a solid gothic mystery plot ... those who lapped up THE DA VINCI CODE will be clamoring for more in this series - LIBRARY JOURNALA rip-roaring good adventure that combines the headlong pace of Indiana Jones with the religious convolutions of THE DA VINCI CODE ... This is a thriller of dark subterranean complexity, rather like a rare, vintage red wine - NY JOURNAL OF BOOKSPure genius ... a must read - SUSPENSE MAGAZINEGood escapist reading in the Dan Brown vein. And these writers can write - KIRKUS REVIEWSTheir story seamlessly blends modern-day technology with historical intrigue and otherworldly phenomena. The highly original plot combines gripping world-could-end drama with characters who are complex, fascinating and personable - ROMANTIC TIMES

James Rollins is the author of several bestselling novels and series, including the SIGMA force series. An amateur spelunker and scuba enthusiast, he also holds a doctorate in veterinary medicine. He currently lives and writes in Sacramento, California.

GOR006555032
Innocent Blood by James Rollins
James Rollins
Blood Gospel Book II
Used - Very Good
Paperback
Orion Publishing Co
2015-04-09
448
1409120511
9781409120513
N/A
Book picture is for illustrative purposes only, actual binding, cover or edition may vary.
This is a used book - there is no escaping the fact it has been read by someone else and it will show signs of wear and previous use. Overall we expect it to be in very good condition, but if you are not entirely satisfied please get in touch with us.